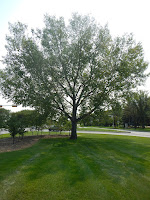 Must have been about two o'clock when I thought, to hell with it, I'll go sit under a tree I like.
(They should have skipped the landscaping, stage right.)

Once when I asked my students to name their favourite tree, few could do it. I got clusters or leafy hiding places but hardly that one tree around which a life had swung.

This one's where for 19 years I turned onto the URegina campus from Wascana parkway southbound. Further on, offstage right, the intersection has been modified for reasons of pedestrian safety and ease. For some observers, new signage is required (while others prefer to see funds directed at leakage in the classrooms).

The tree is my sign, I guess is what I had in mind with my students that day. What's yours?

Those thoughts got me to about 2:15. I'd go and sit and see what the tree might mean, willing to endure taunts or hallelujahs from passing motorists (assuming they're meant for me and not my Leaf cap). (In either case, hey, I'm helpless.)

As things turned out, I couldn't endure the mosquitos, which don't show up in the photograph.

I came here, Stone's Throw, for mint tea. I plan to rub leftover mint on my body and head back out there--dear reader, contain yourself--to consider the tree, which in better photographs or later seasons might show the animal it is. And to consider the signage so loathed or ignored.

Here is where things are heading: 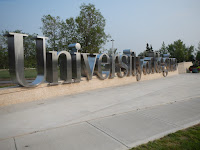 Once you pass this tree, here seen from the south at about 4:30: 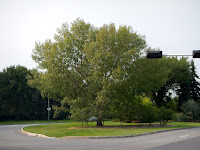 Where am I in all this? 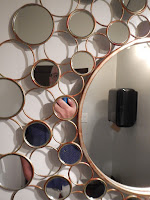 Finally I saw the same locomotive a second time, in other words. I hadn't realized it until five minutes ago when I transcribed the records of a couple of CP locomotive sightings from the voice memo file on my phone. Altogether I'd spotted 69 different locomotives (from 3015 to 9897 over seven years) before 8795 showed up that second time.

I'd made it as far as Gull Lake from Pigeon lake, south of Edmonton, the day before, which I spoke about here.

The rain might have cleared off whether I saw 8795 again or not. And the Riders might end the winless streak anyway.

But chances are better now.
Posted by Gerald Hill at 16:04 No comments:

Which of These Would Bug You?

No speed.
No toughness.
Devoid of commitment.
Unfit.
No sense of team.
No ability to finish.
No coach you care about.
No parents in the stands.
No will.
No recovery, no pressure.
No desire to win.
No height, no long arms.
Can't draw fouls, can't convert when you do.
No team-mates behind you.
No movement with or without the ball.
No victories one-on-one.
No one who rushes over to pick you up.
No moves to create openings.
No idea how to huddle with the game on the line.
No crashing the boards.
No coach who listens.
No points in the paint.

Anyway, none of this applies to the FIBA Americas Women's Basketball champs from Canada, who ran away from Cuba in the final, in Edmonton last Sunday.
Posted by Gerald Hill at 19:41 No comments:

According to last night's dream, I was just getting home from somewhere or other on horseback when my boss asked if I'd like to do something short. Apparently Sarah Jessica Parker was shooting a commercial and they needed a cowboy. I didn't really want to but said yes as a favour to Lou, the boss. I began to make my way to the shoot which was happening at the Luther College high school campus. When I got there, Titanic was just about to dock. A young kid was quite excited about it, jawing back and forth with the crew, who became annoyed. On the way up the gang, a woman I'd met earlier wanted to break a bottle of champagne, which she did. We didn't drink any but let it run over our fingers. I approached the wicket to sign in for the commercial. The guy asked if I had any visible tattoos. I said no. Those few seconds were enough for both of us to realize I wouldn't be getting the part but we chatted. He said they were looking for a very specific cockney accent. He said to be sure to thank Lou for sending me over, and I left. I realized later that I should have stayed there at the edge of the set in my cowboy hat and long coat until I got so hungry and miserable looking that they had to give me the part.
Posted by Gerald Hill at 07:46 No comments:

One Afternoon at the Regina Folk Festival

To get the bad photograph over with, let's upload it here: 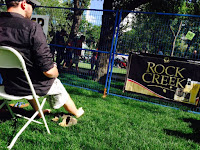 Blame it on Rock Creek, on the grass. Don't blame it on the fence, which permits close (if blue-gridded) conversation about the highway to Kelowna, 120-30 on the Coquihalla. I tell you, you'd want to buy a ticket to pursue the vibe here, but you'll settle for outside the fence where the music though invisible in origin remains loud, a half block away still loud.

(I wasn't really on assignment. She's got a culvert project and had asked me a while ago about a giant culvert at Herbert, my hometown. I didn't know anything about it but referred Brenda to my oldest sister. If you want to know what Brenda is up to with the culverts, ask her!)

I spent last night in Tompkins on my way home from three weeks west. A delightful five hours, a sleep of trains. 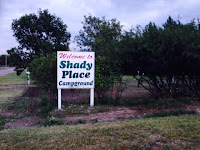 In Swift Current, my new friend Shauna caught me up on the local weather while she served my bacon and eggs. 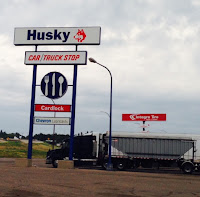 I drove to Herbert to look for the giant culvert. Annette Bower's dad installed it in the early 50s--he hauled the sheet metal out there and built the culvert on the spot--and says it's still there. This must be it: 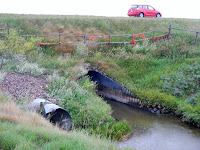 Annette's dad built the culvert under a stretch of the old Trans-Canada, before they built a faster one that skirts Herbert on the south side.

I'd already announced several years ago that I want my ashes scattered along here.

The cemetery's just north across the tracks.

And I swung by the house of my first ten years while I was at it. 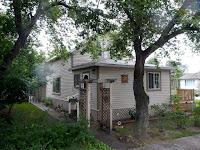 He's loving all the attention, the hairy tube of a dog at Esther's this morning. Recently I've been writing short prose bits in which a dog thinks this and does that. A different dog each time, I suppose, though I'm the one wagging. Anything such as the previous sentence I might say about this writing requires more thought than the writing itself has ever carried.
Restaurants and  cafes in Kelowna often feature bowls of water for the mutts. Signs warn us not to leave mutts in cars. No dog in either of those scenarios interests me, really, as much as the dog I insert into my dream of being arrested, the dog that sniffs me sleeping at the beach, the dog not lucky but Leckie (a street leading off the highway here). Dogs with names like Papyrus, Phony, or Grandma. A lousy play is said to be a dog, as is a lazy worker.
So yes, here's to the work crew at the courthouse in Regina who shovel without bending, who stand around in shadows, who stroll around to the front.