Turning Sixty (plus 13 or so hours)

First blunder after becoming this old: 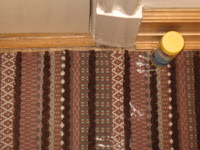 Installing foot powder
where it easily falls down.﻿
Posted by Gerald Hill at 13:18 4 comments:

So far--it's been only a couple of hours--I prefer 60 to 59. That teetering tower in the "one's column", as we used to call it, that goes by the name 9 felt more nervous than the beautiful 0 I've got there now. Over in the "ten's column", sure the 6 is a notch higher, but it's 6 decades, dear reader.
Here they are:
decade one I played under the big sky around Herbert (remember those readers with names like Open Skies or Open Roads?);
decade two I practiced every anxiety known to boy;
decade three was half clueless half motivated, start of my teaching career;
decade four was writing and marriage;
decade five was writing and separation;
decade six was writing arrival to young oldmanhood;
decade seven, at this point halfway through a bowl of cereal, will later today see a man about a map, a daughter about a new photograph for my website and on and on it goes.
Yes, give me sixty.
Posted by Gerald Hill at 08:37 2 comments:

Why I Prefer Miles (One Night Driving Back from Glendive, Montana, Where I Intercepted My Son Half-way Through His 50-hour Drive on the U.S. Interstates from New York toward Victoria)

They're longer, more open.
You put your lips together to say them, instead of cackling from the back of your mouth (as in kilometers).
How far from the border would you rather be?
We walked or biked to OneMile Crossing along the CPR mainline east of Herbert--my many sisters to neck with their boyfriends or smoke Black Cats, my pals and me to open packs of baseball cards. (All "one kilometer crossing" crossing would be good for is burning our little bums on the hot rails.)
It's automatic: Where's Herbert? 30 miles east of Swift Current. Another 85 to Moose Jaw.
Farms were two miles north, half-mile east, another half-mile north from town. (Any of you, my dear readers, who come from farm stock--that's you, Aunt Daisy and Uncle Fitzgerald--know that your quarter-section is a half-mile square.)
A sign can announce MILE
1
2
and mean it.
East of Glendive I crossed Thirteen Mile Creek. I'll claim no creek is named for a kilometer.
After a meal together, Tom and Devin (of Hip.Bang fame) would head west through Miles City (named, surely, after wide spaces, not some guy named Miles City).
Across the Yellowstone and Missouri rivers, those are miles, man.
And you've gotta hand it to the miles and miles of stars, Montana night. 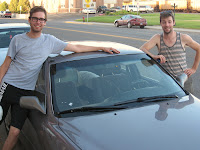 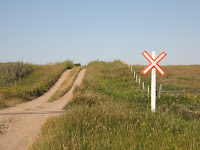 I prefer this spot to the Kenaston Rest Area with that sign which cannot be spoken here. 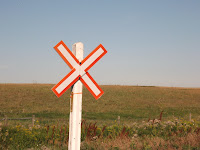 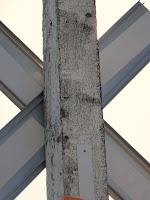 Joni Mitchell twice through in my head. 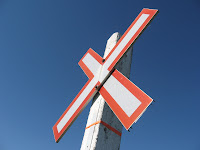 Because each of the words family and home implies the other, most of the time, little else needs saying.
My sisters claim to laugh at every wisecrack I offer but who wouldn't. My grandson, more and more into walking, expects to fall forward or arrive safely to where I sit, that look on his face.
Where I sit now--an area of Strathcona, joined in the 1890s to Edmonton across the North Sask (which my sisters and I ferried across last week at Wingard, Sask) but settled orginally by a rag-tag group of settlers including a Metis man, Laurent Garneau, who was thrown in jail in '85 as a Riel sympathizer, his Scottish wife Eleanor grinding Riel's letters to bits in her washbucket as the Fort Edm Home Guard paddled across to get Laurent--yes where I sit now, across from the blues bar on Whyte (next to the former hall where Garneau played fiddle as the settlement grew), I'm waiting for my breakfast, for a few hours to pass, for my daughter Lucy's last show at the Edmonton fringe--Bertha, a wise/sad/sweet half-mask clown/woman whose "bon voyage party" takes her--she hopes, she desperately and sweetly hopes--somewhere home.
Then I had back home myself.
I guess history's a home too--one we imagine, like all homes.
Posted by Gerald Hill at 09:42 3 comments:

Home is a flag with many countries (other way around maybe).
One, a gravesite in Wynyard where a brother was buried. I wasn't born yet but two of my sisters were.
Two, a road, any of those back roads our relatives drove.
Three, a patch of smooth pavement after BROKEN SURFACE sign.
Four, one of my students in Cabri, scene in the hotel pub at the start of a Rider game.
Five, another gravesite, for a moment four sisters.
Six, that blue thing hanging in our eyes.
Anywhere else the car stops.
Even Regina where one sister was born, three lived, and I three different times moved.
Posted by Gerald Hill at 12:04 1 comment:

The sisters are all down at the spa gift shop, buying the place out. I haven't got much time; they'll be along any moment and I'll have to buy beer in addition to the one I've already got, which I haven't much time to pour down.
This aft, driving back to our B and B from town past the golf course, we watched one golfer run across our path to retrieve his ball from the far ditch--at least 60 yards from the nearest in-bounds. I'd buy the man a beer if I had more time.
Before that, the power was out. I couldn't sleep.
Yesterday my youngest sister, referring to the fabled Manitou Lake, said Get down there and feel it and see it which I thought was pretty good advice for any writer.
But I haven't much time. With what's left of it, I'll overhear golfers, who with every shot have had to deal with the same stiff wind that kicked at our floating feet in the lake this aft. Well, before I finished that sentence they left. There they go down the cartpath.
So long, dear readers (that's you, Uncle Roy and Aunt Dale) from the clubhouse at Manitou Beach.

One more Ouzo, a sister says. But I'm going to have mine inside and that's the last I'll see of her until the morning. After four of us in one suite in Riverhurst last night, we've fanned out in Rosthern tonight--one double and two singles.
We ran into a most un-communicative ferry operator on the Wingard ferry earlier. This is all the bugger deserves:

We had Ouzo on our minds. 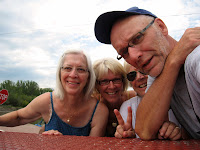 List of what woke us:
hail adjusters
river next door (where next is
twenty miles north and door
is access road)
woman in raglan-sleeved Jets shirt
Rider loss
flipped hinge of a SportRack
Co-op opening
need for good coffee downtown
scent of home-made foot balm
two hands loaded with hearts
kicks of stones below the boardwalk below our rooms
and what finally gets us: birds we offer names
(which, if not the right ones, they can trade)

The sisters have mustered near Edmonton, checking in within whatever rules re luggage size a birthday boy might impose.
The plastic container for a roll of toilet paper, however--so it won't crush, says a sister--will have to stay behind. Even recognizing that toilet paper issues differ between his sisters and himself, the birthday boy stands firm. A touch of crush won't hurt, he says.
The day is dark so far. In their overnight acreage just out of the city, the sisters will be gathering their scarves and leggings, their armloads of carry-on, their lunch. It's time to begin.
Posted by Gerald Hill at 05:29 2 comments: