Yesterday at 2:00 pm, one hundred years to the hour since the sod-turning ceremony for the Luther Academy in Melville commenced, I reached into the back of my car--parked to face the Academy, now Melville Heritage Museum--for my shovel. 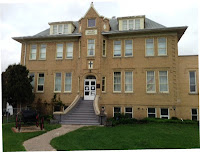 I'm Poet Laureate of Luther's 100th Anniversary festivities this fall. I'd been fired up by the idea of turning some sod of my own, maybe even a strand of the same sod the pastors and Melville dignitaries turned in 1913. 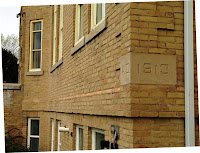 Trouble is, no sod. The Museum sits hard against a nursing home on one side, a 1954 addition on the other. Parking lot around back, lawn in front. Unless I dug up grass or blacktop, or messed with a family memorial garden, or helped myself to the ditch along highway 10, a football kick from the Museum, I'd turn no sod.
I went up and down about it a few times. 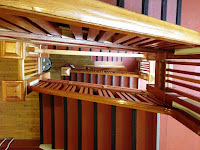 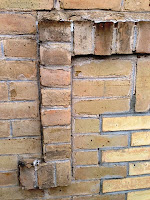 I spotted the fire escape on the west side and climbed up and sat for an hour and a half until, I reckoned, the pastors a hundred years ago were done saying a few words over their turned sod. 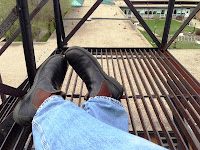 A while later, an Ambulance pulled out from the nursing home parking lot next to the former Academy. I wasn't on it.

Looks wet, an hour past sunrise already. Today's the day I load the shovel into the car and drive up highway 10 a ways. Can't say too much about it yet, except that the same thing happened one hundred years ago, minus the car (I doubt there was a highway either, and I wasn't the one digging). No point in hitting the road until 8, but I was lying in bed, beginning to work on the piece--oops, that's a hint--so I might as well get up . . .
Posted by Gerald Hill at 05:48 1 comment:

Readers of this blog--hey there Uncle Phyllis and Aunt Pete--will have noted references to Hillsdale, a 50s-era subdivision of south Regina. I think this was the first time I spoke of it, a turning of the first word, I suppose.
Well it's in the can now. Friday I shipped the file to Newest, who are bringing the book out next year. I wrote it because I loved writing it.
In five days I'll turn another new word, so to speak. Can't tell you much now, but there's a shovel.
Posted by Gerald Hill at 14:08 3 comments:

I had in mind a wee exploration of where this piece of public art is and what it's doing and why aren't we told who made it and what it's called. I took photos. 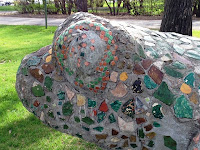 I spent half an hour there and another half in the coffee shop over a breakfast tea sending the photos one by one from my phone to my computer.
I thought it had been installed in 1972 or so during the height of the pop/folk/funk ceramics period at U of R with Gilhooly and Yurisity and Fafard and others. The frog looks a tad crude up close, and in need of repair. (If this is a frog, I thought at one point, that aged, washed-up leftie--hanging on to face only one or two batters per outing, once or twice a week--is a viable  relief pitcher for the Jays.) But while everyone else is just on the way to work, the frog's been here 40 years.
And that was the idea (including the word frogment). I pedalled out to the campus to flesh it out and, not incidentally, to get on the U's case for lack of plaquage for the frog.
Turns out that Fafard himself had the thing built. Story here.
﻿

I remember one of my teachers, Fred Wah, saying he'd have several projects on a go and he'd toss his language in the air and it would land on one of them. Starting tomorrow morning I'm going to act more single-minded: use the Farmer's Almanac to predict and/or report on the construction of a schoolhouse a hundred years ago. Until I come up with something more interesting, that description will have to do.
I'm trying to keep it a secret. Hint: shovel. Hint: put the shovel down and get inside.
I don't know how my many readers (that's you, Uncle Lou and Aunt Ise--don't worry about the Leafs, they were playing with house money) see the Almanac, but for me it's about story, not fact. And it's about detail. Apologists for the builders of the school house may exist. They make stake claims on the truth, but I'm going to make a verb of almanac and we'll see.
Hint: sod-turning May 30.
Posted by Gerald Hill at 18:19 No comments:

I don't know whether to draw these or complain about them. 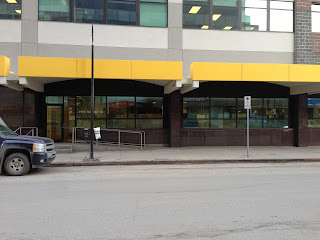 Now, in warmer weather, downtown should come alive. It tries, but half-block after half-block of frontage that doesn't admit or invite pedestrian traffic, other than to those who work there, kills downtown, yes kills it.
I'll shoot more of these.

If any subject requires no hurry, it's this one. I finish this post, play backgammon. I'll start at the nearest edge; that cloudish, getting-warmer sky will do. Having read somewhere that a bit of foreground detail best frames infinity beyond, I'll see what the trees in Victoria Park have to say, from my spot on a bench there. I'll take the F pencil, for FAR.
Posted by Gerald Hill at 14:27 No comments: