I'm not that comfortable talking about my poetic (at least directly--I may talk about nothing else, indirectly), so I try to avoid doing so. Or the other way around.
But I gave it a shot with Fernando Pessoa today, though I found his approach a tad rigid. 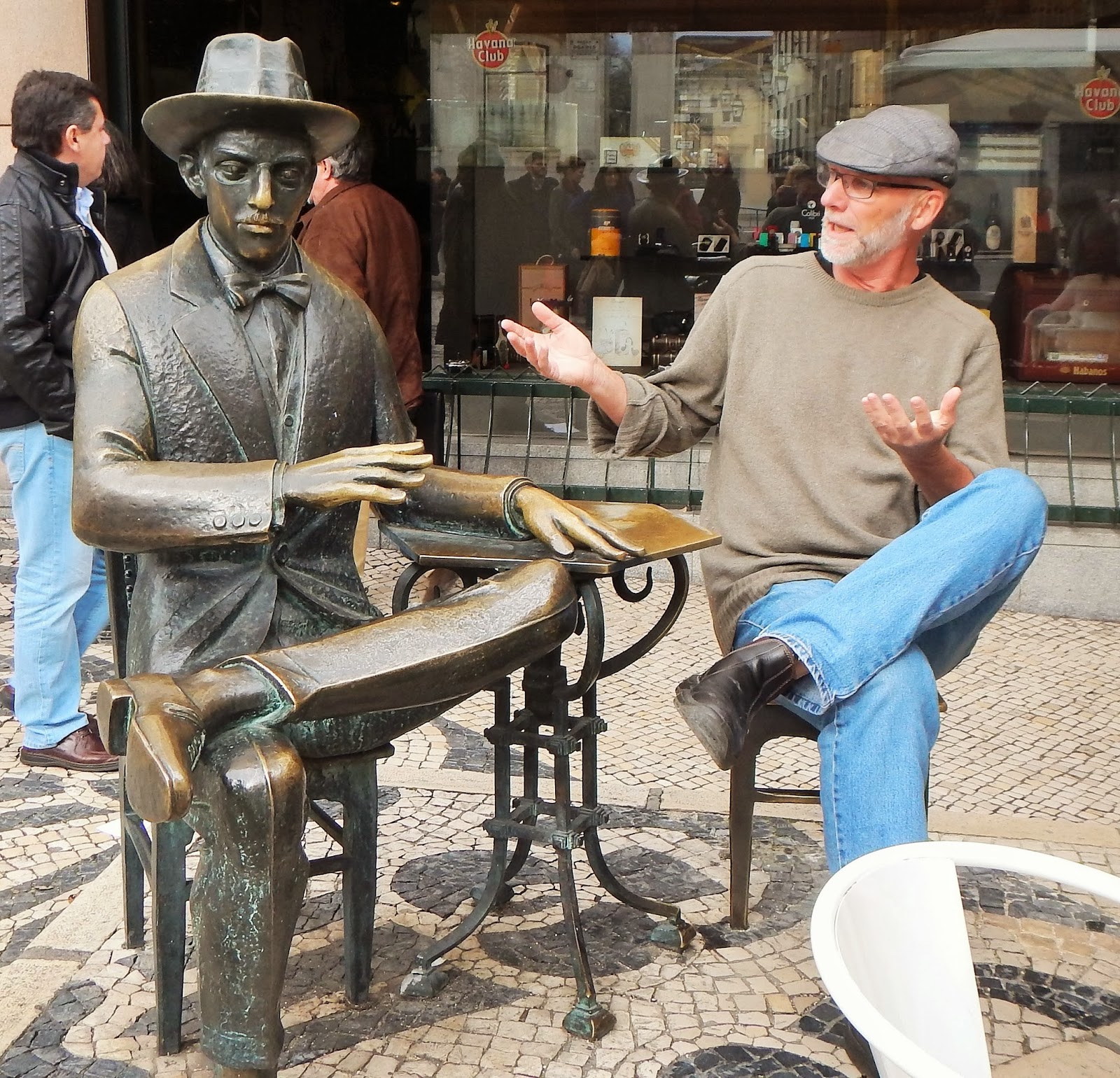 I wasn't the only one. 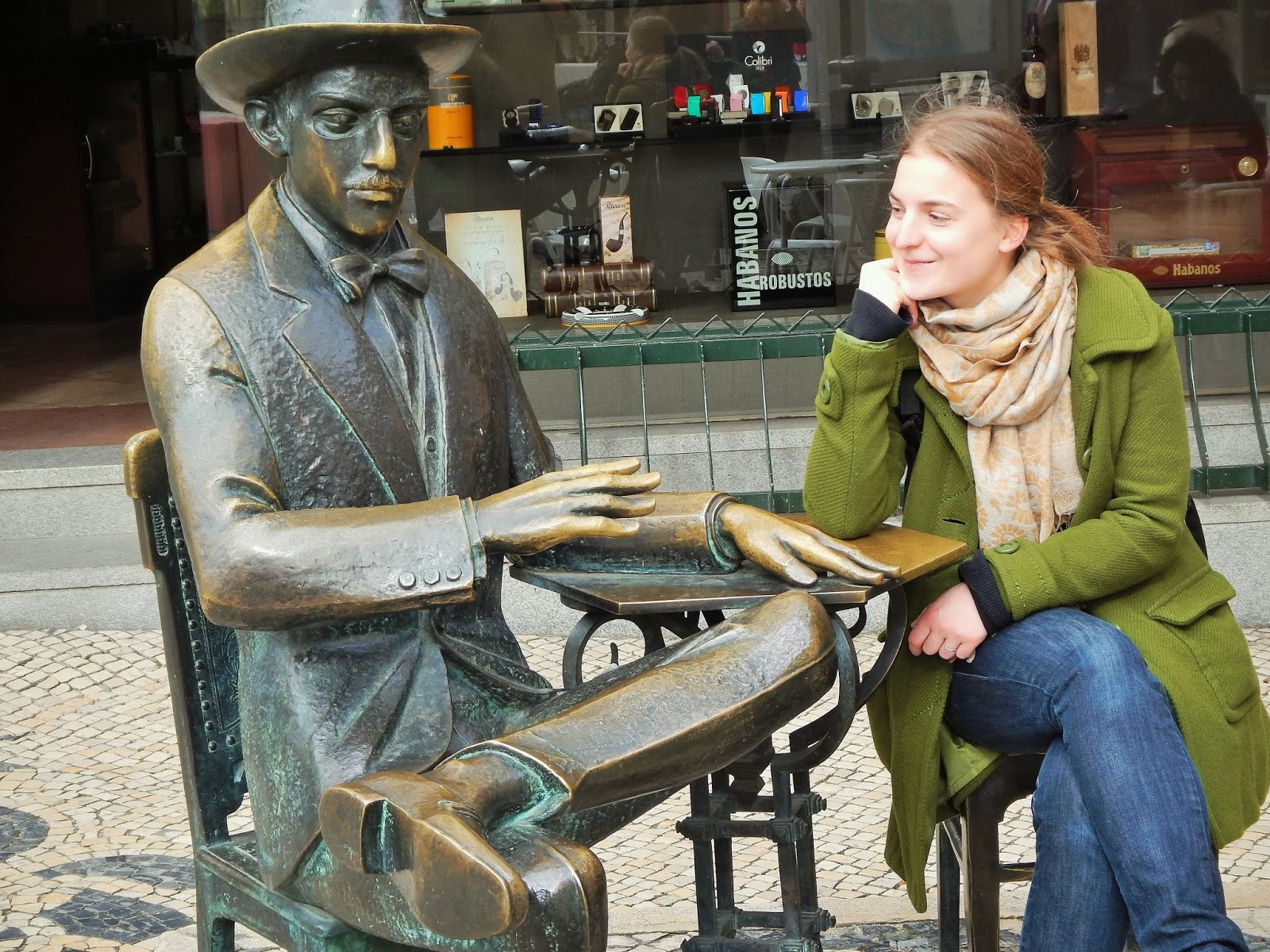 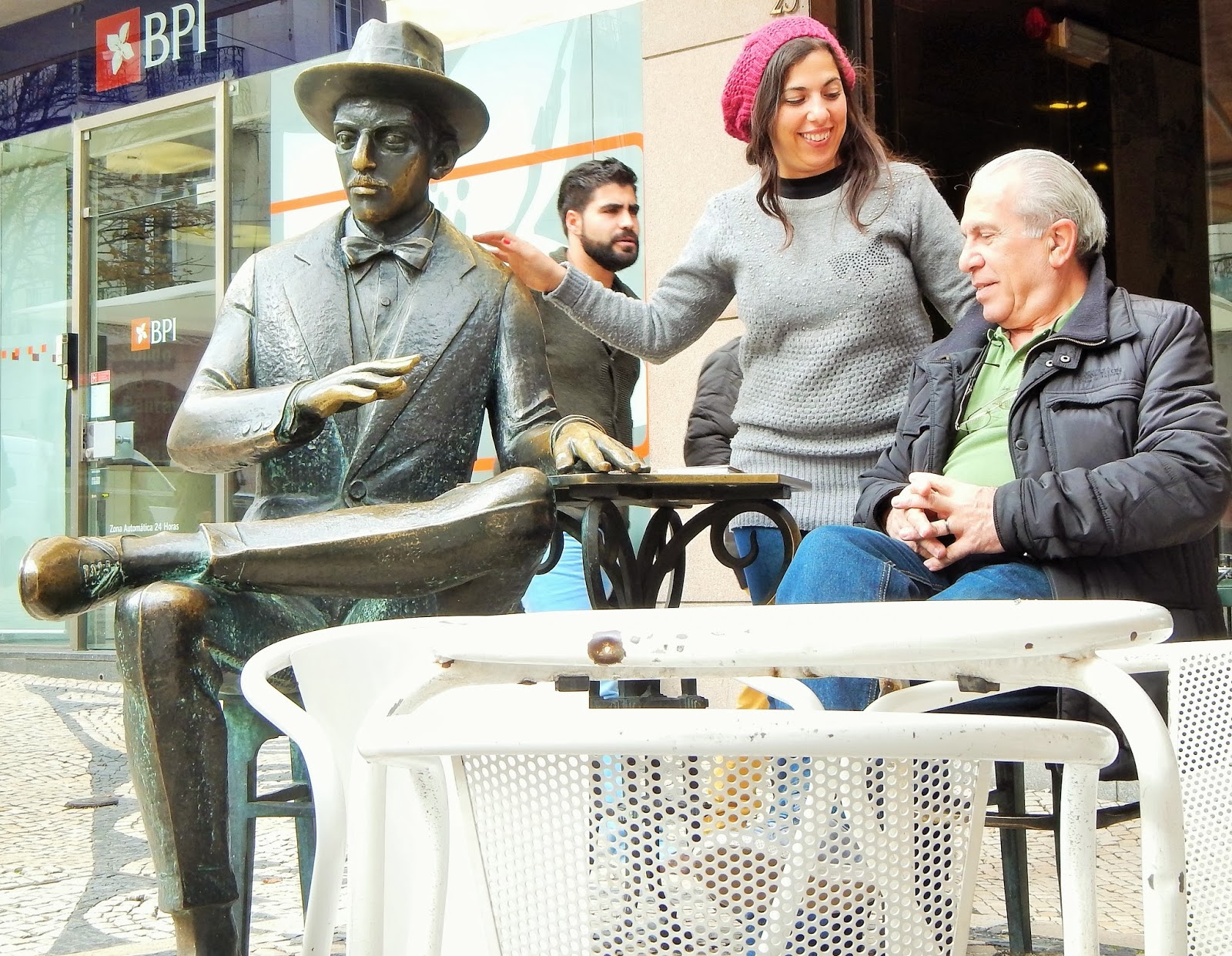 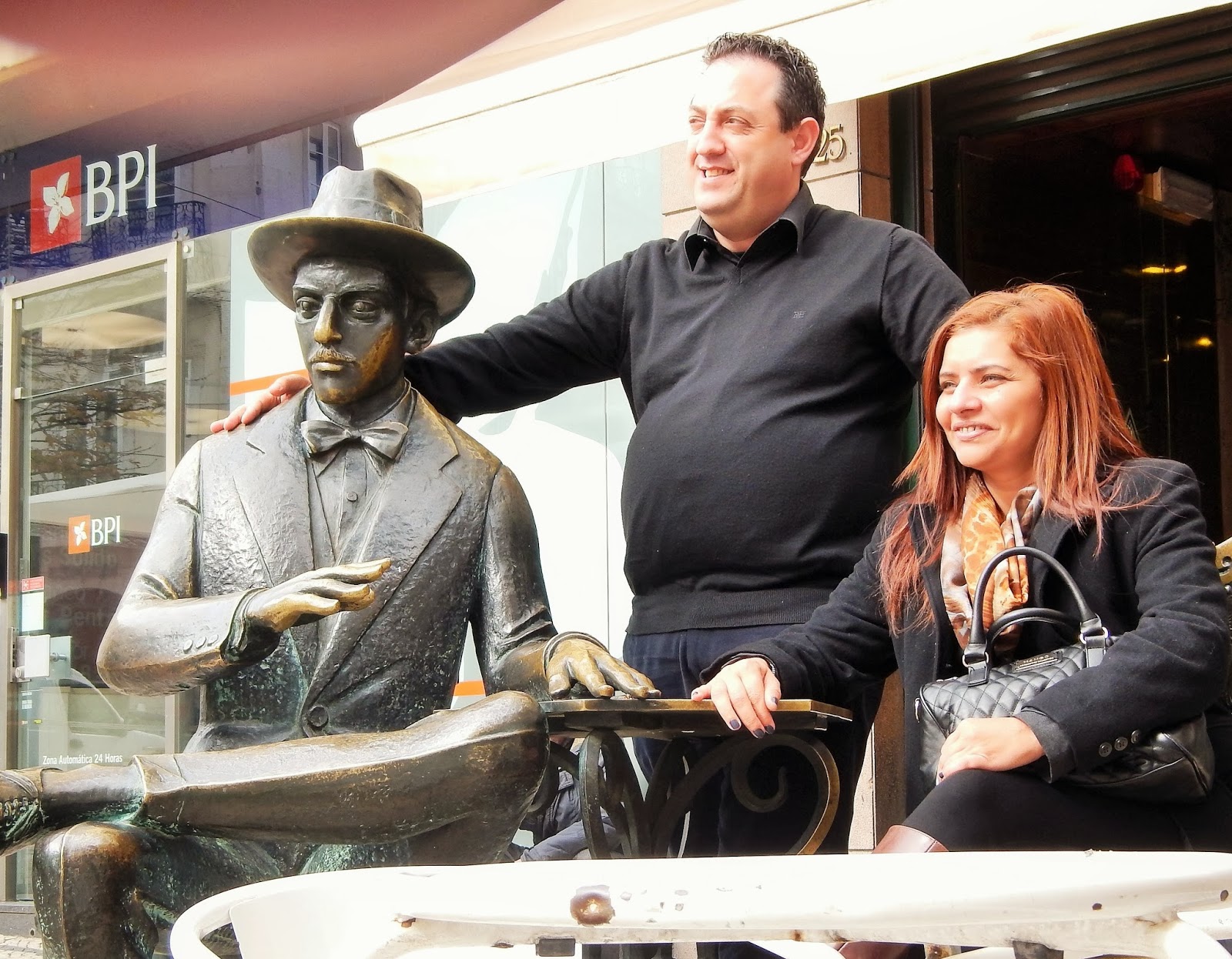 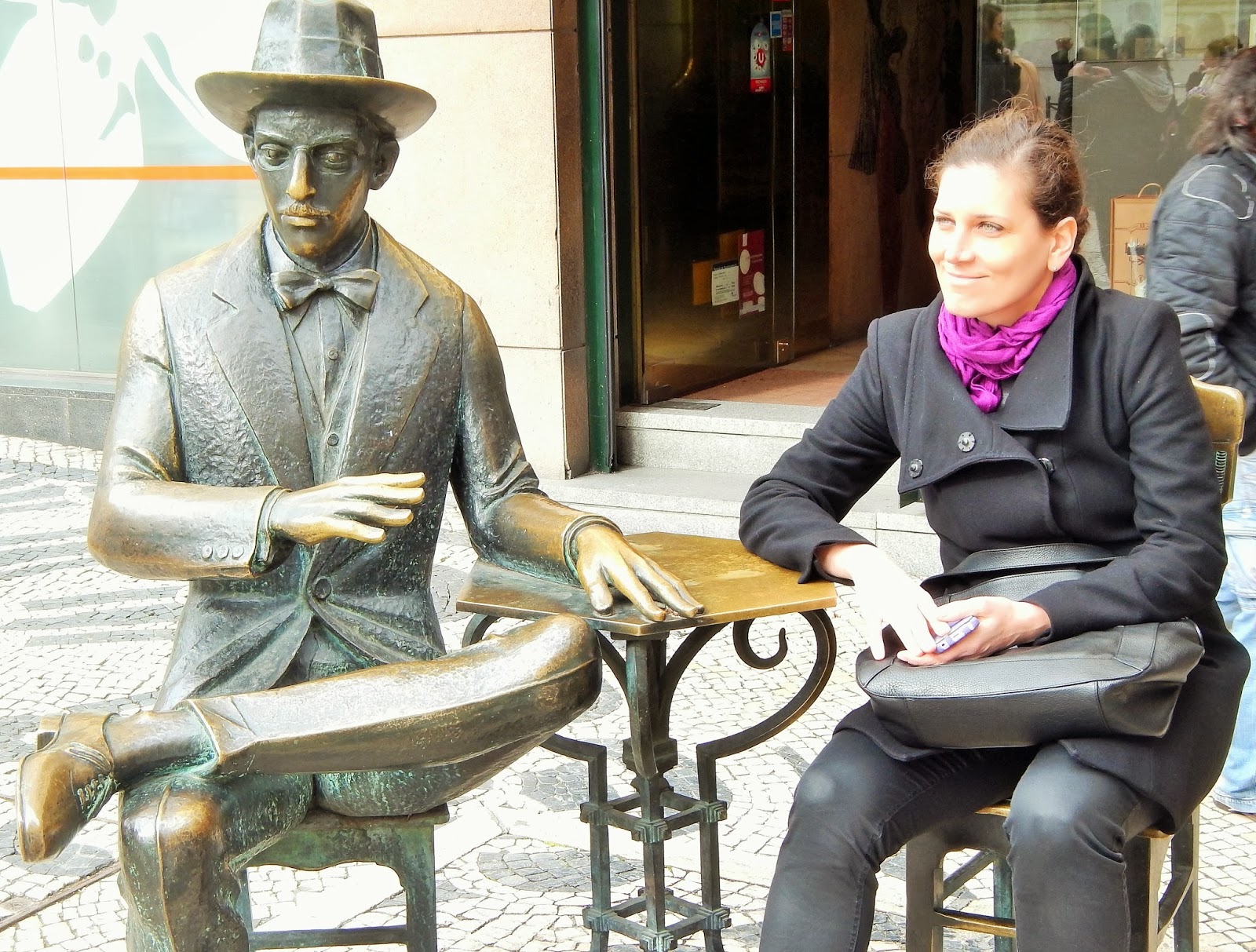 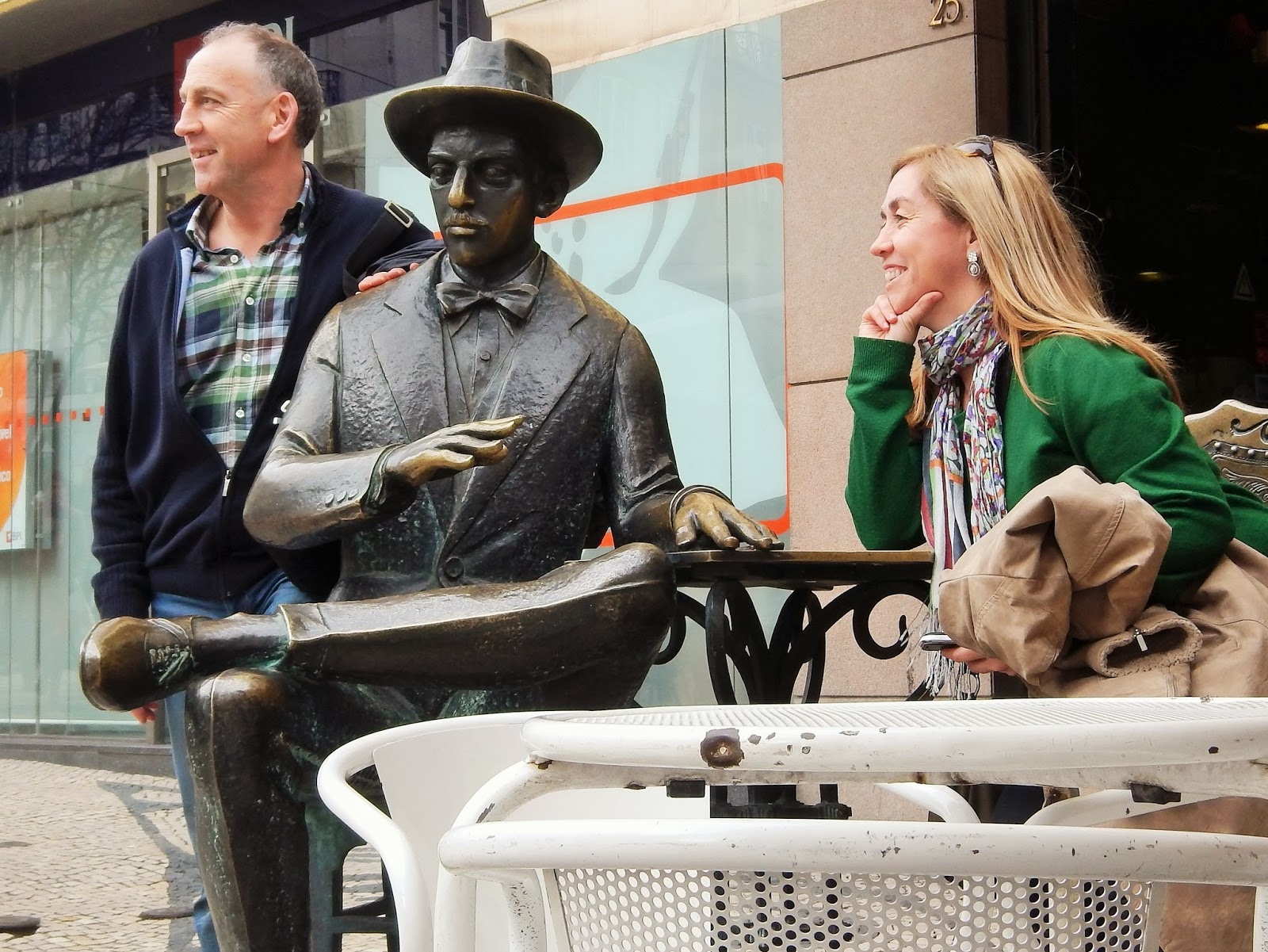 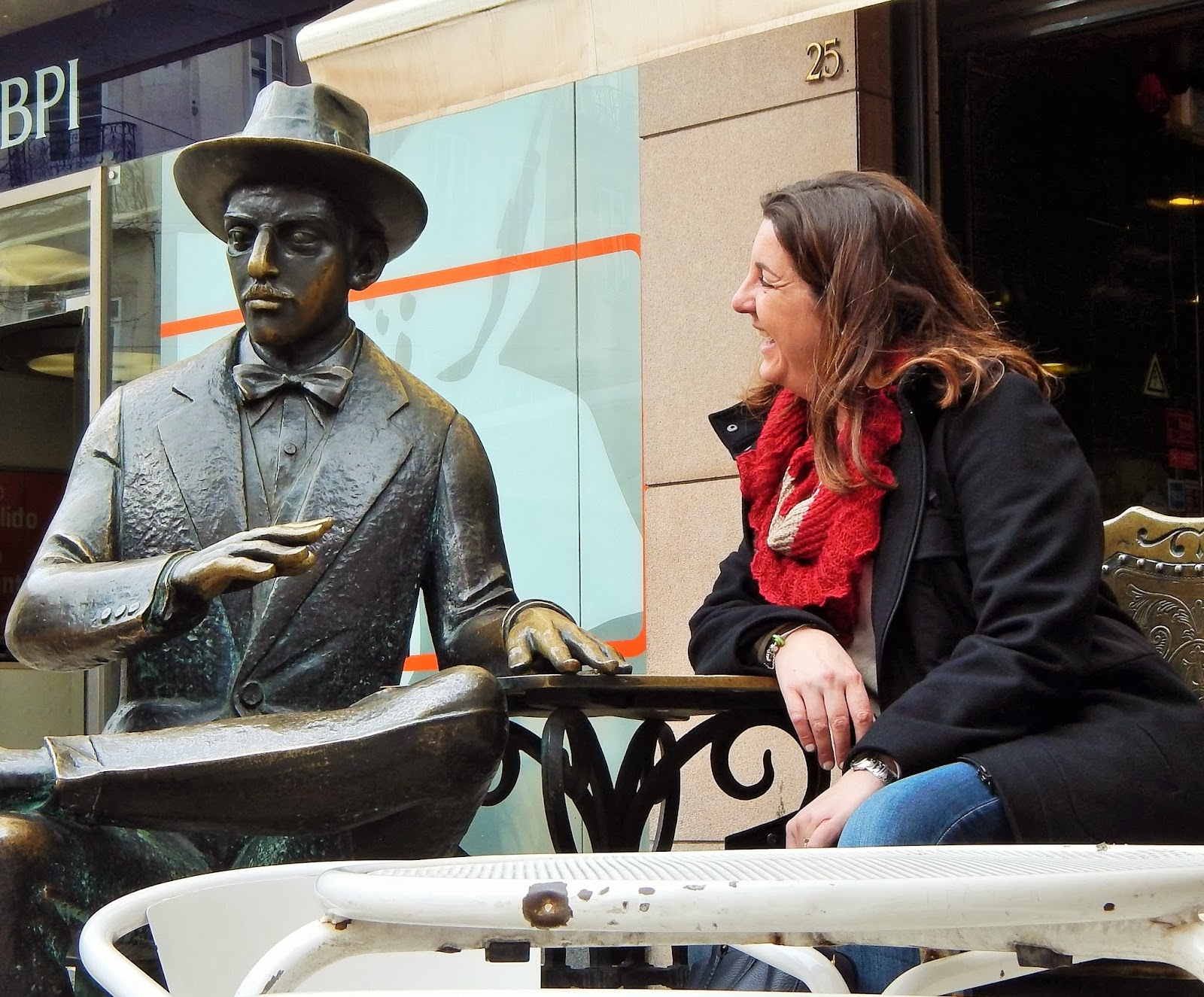 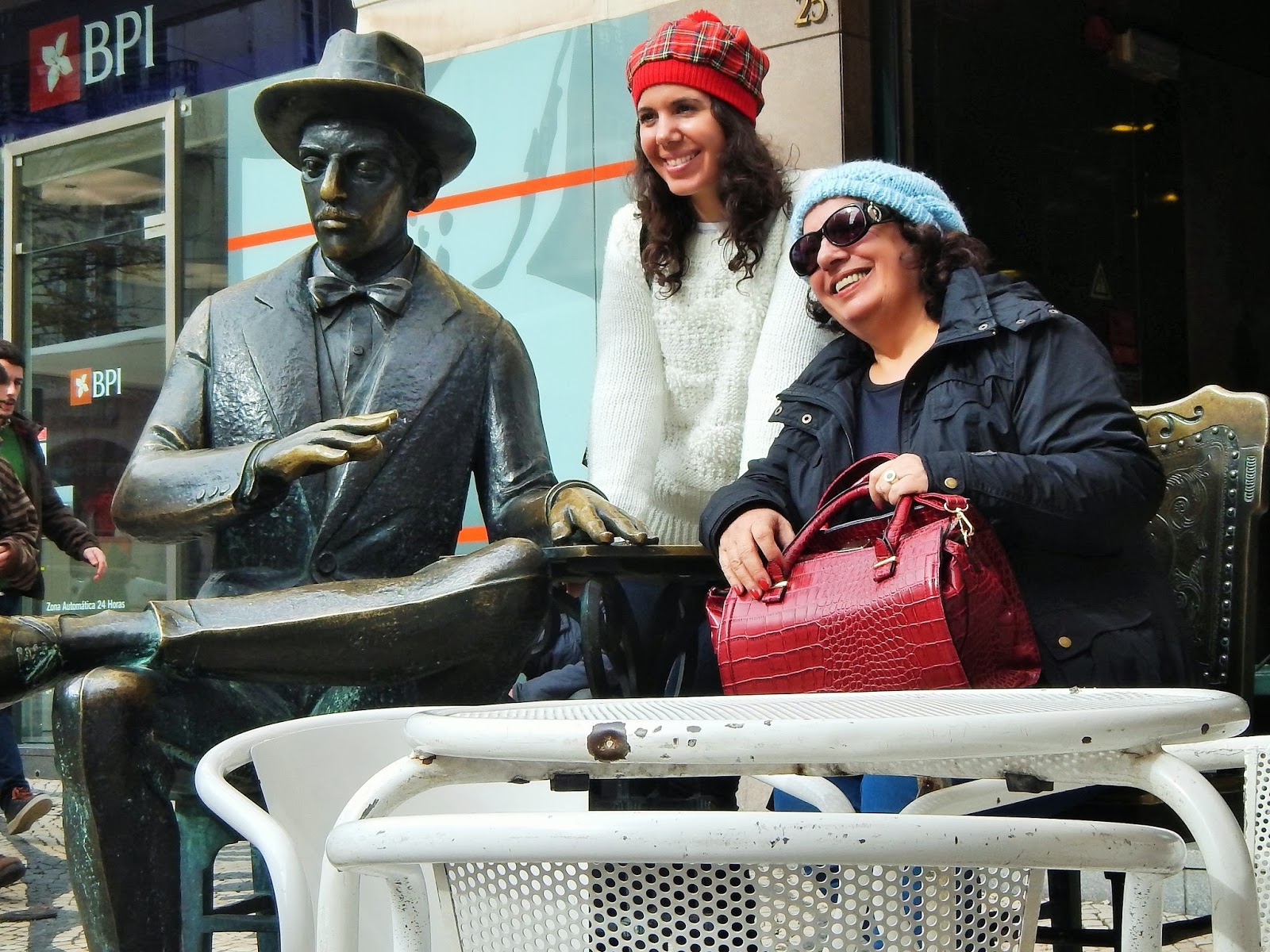 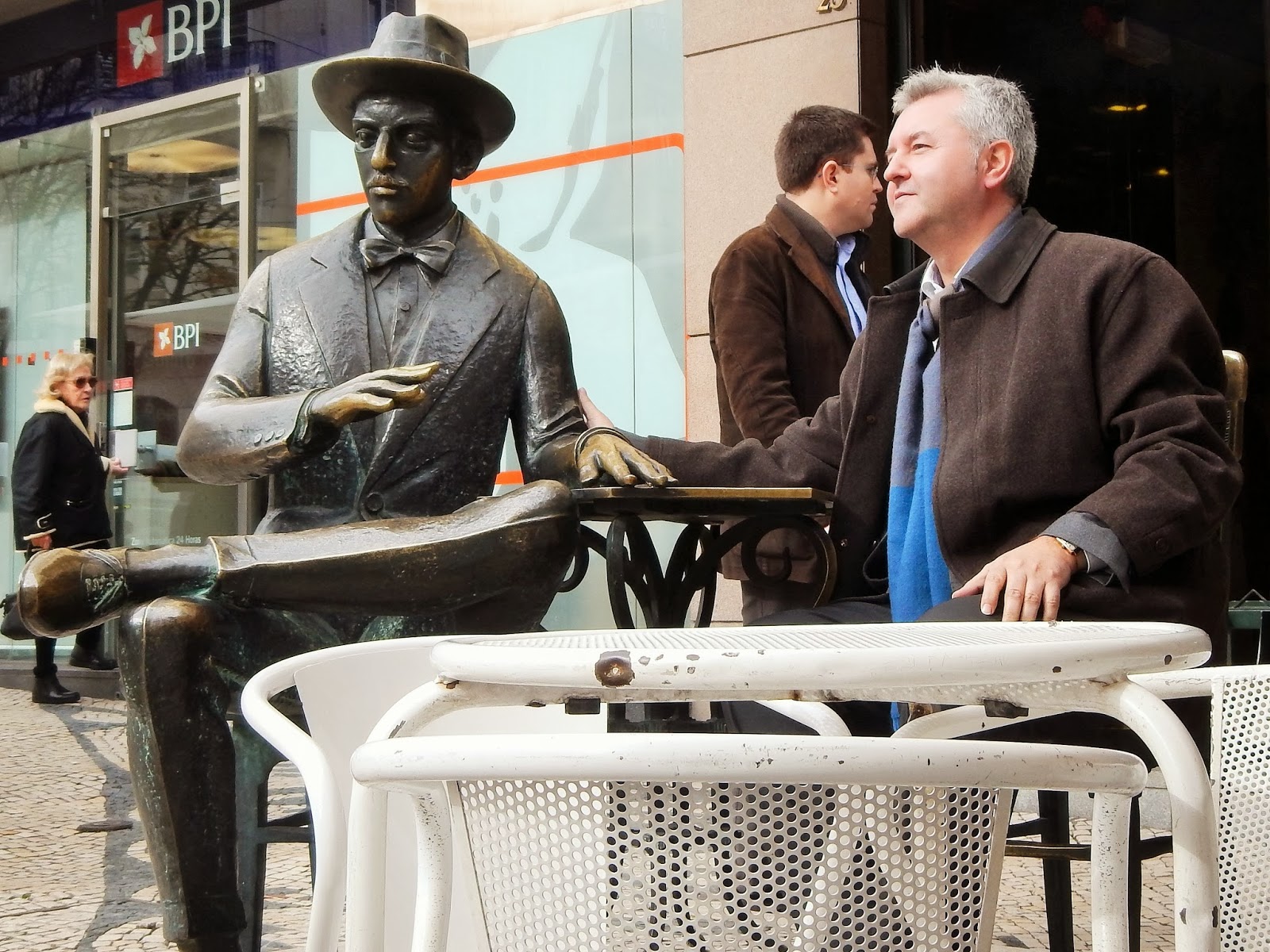 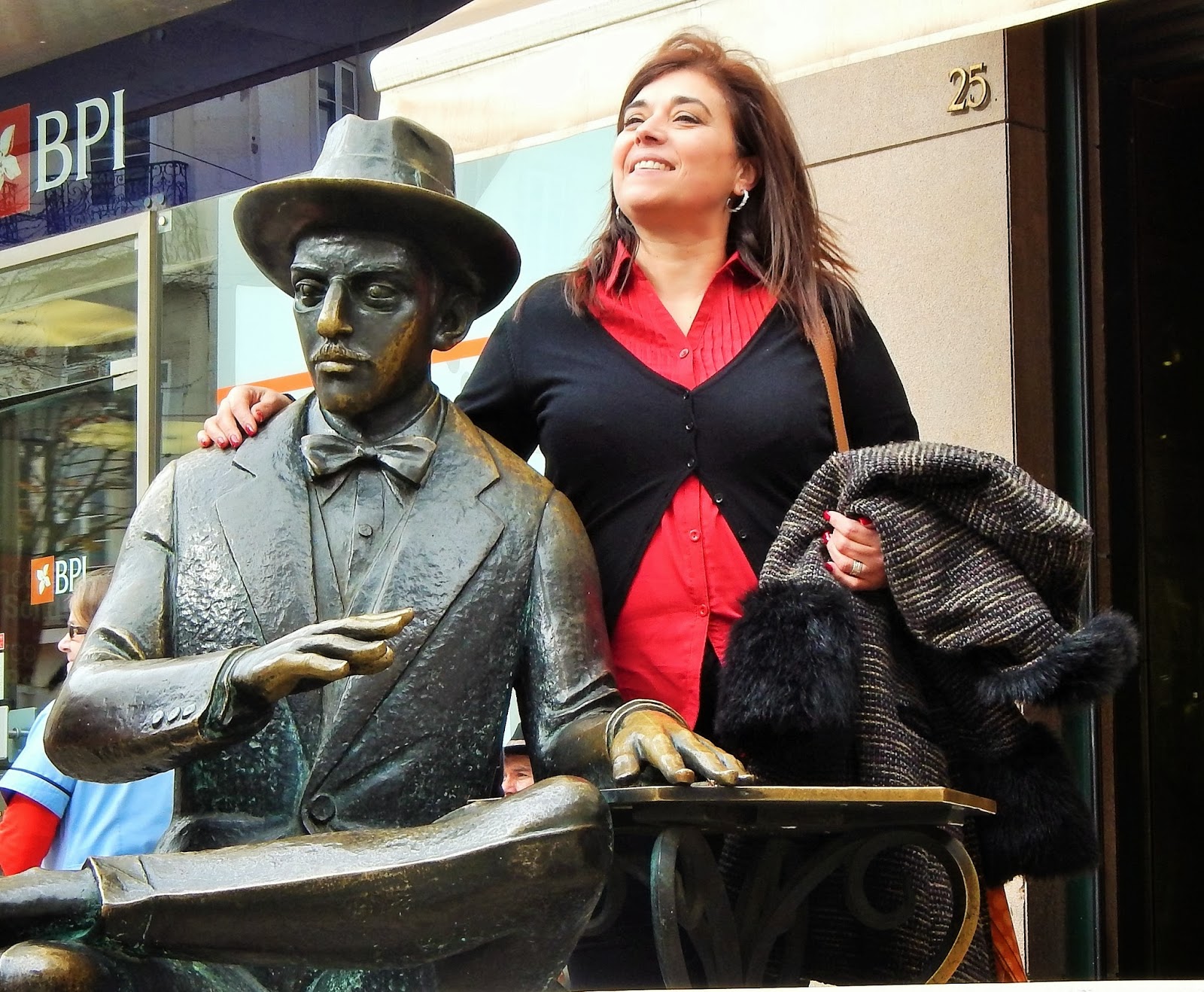 It's the Sun, Simple As That

I guess we could call the sun "central heating". Otherwise, we have none. If the sun takes a moment behind a cloud, we're pulling the down vests out of our backpacks and tucking in our shirts. In the lightest of rains, we're deploying our Tilley umbrellas, for no other reason than that wet means cold and stays wet.
The Phoenicians must have had the same problem, and the Romans and the Moors, even the Spaniards, who ruled for about 60 years. But it was the Portuguese themselves--the guy down the block claims every Portuguese is all of the above--who took the earthquake in '55 (All Saints' Day, 1755). The rebuilding, supervised by one Marques de Pombal, laid down a grid system, thought to be the latest thing (even well into the 20th century, until '55 or so (1955) when a suburb like Hillsdale was built). From the ancient river landing straight north to the huge plaza of Rossio, territory walked over and over by the poet Pessoa--all reclaimed from the devastation of the earthquake and the river itself.
None of that much mattered today when I sat before a couple of excellent dark beer in the cervezaria down the block, which happens to get the sun, if there is any, in the late afternoon hours. In my notebook I was trying to reconcile the contemporary life of the street with the former Roman cemetery under what it now Placa do Rossio. I couldn't come up with much, but I'm pretty sure I saw a Phoenician on Tram 28, and two Romans smoking in the doorway of the café.
Posted by Gerald Hill at 13:51 No comments:

A Man Who Loves a Place

I found out yesterday that someone had found among the papers of the poet Fernando Pessoa after he died a manuscript, written in English, called Lisbon: What the Tourist Should See. Pessoa's tour begins, as we all do, with water (in this case, the docks at Alcantra, where the cruise ships dock--squint back a hundred years). 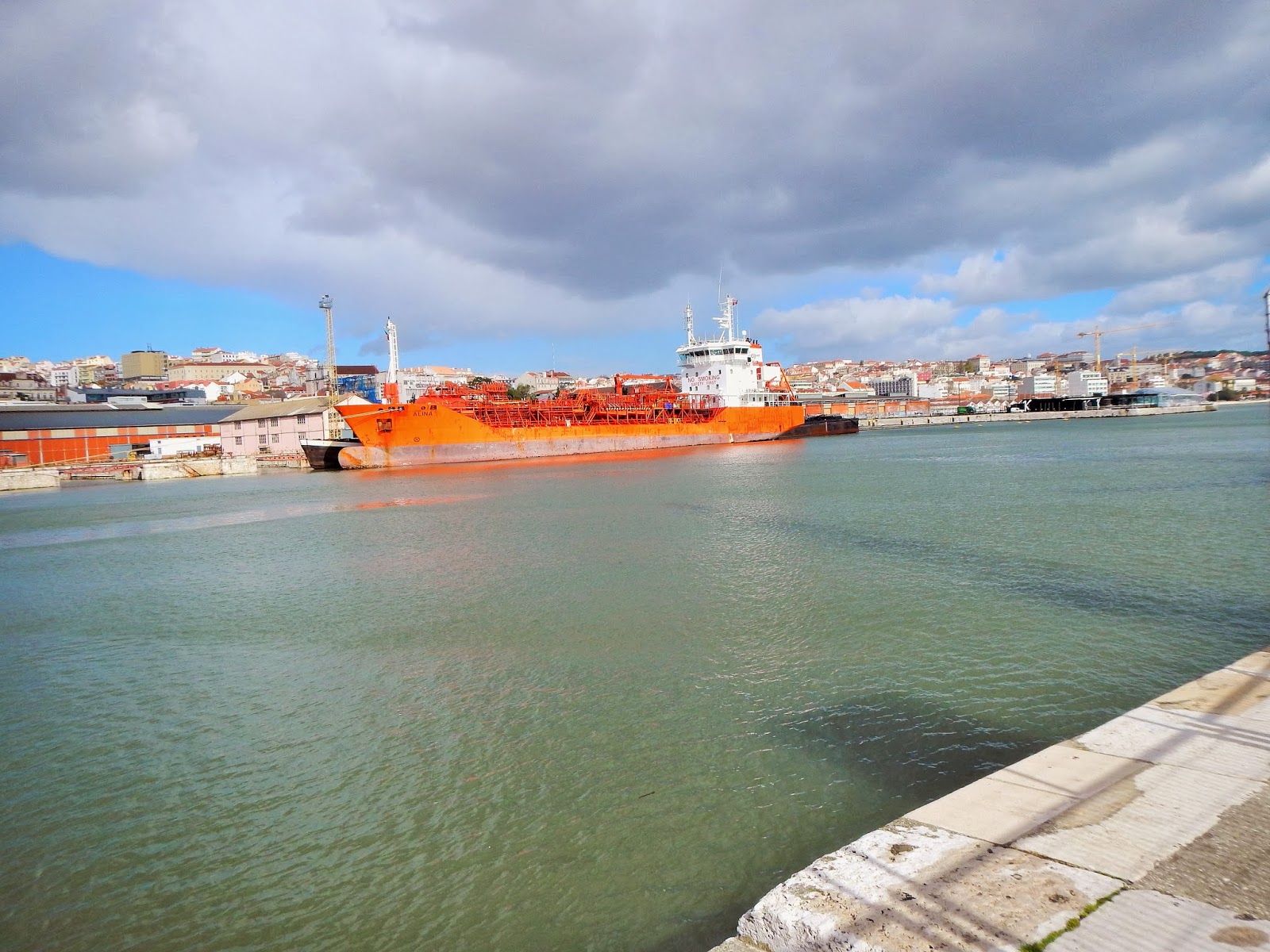 I rode Pessoa's imaginary car to the Praca do Comercio. 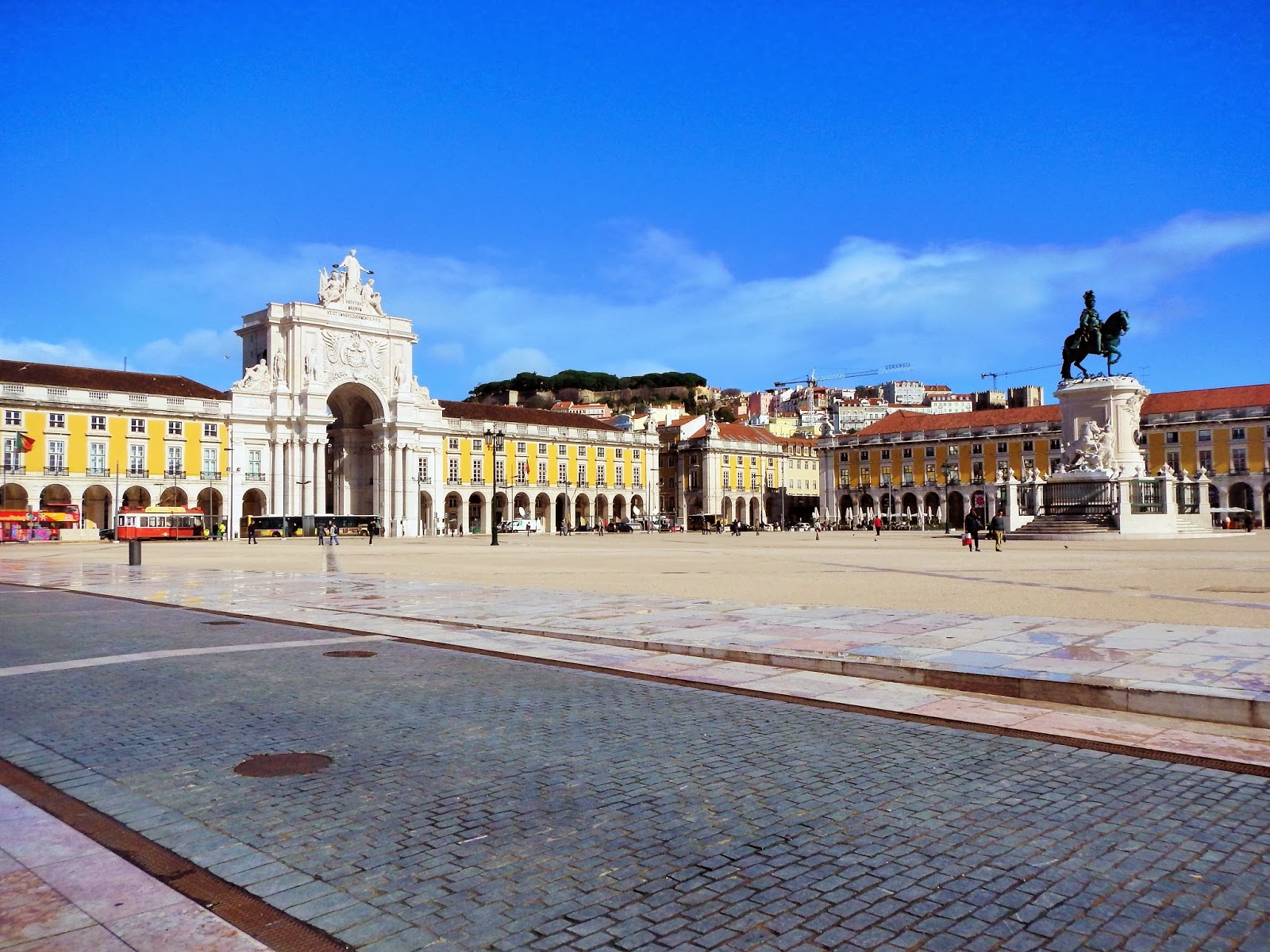 Up a broad avenue to Praca Marques de Pombal. 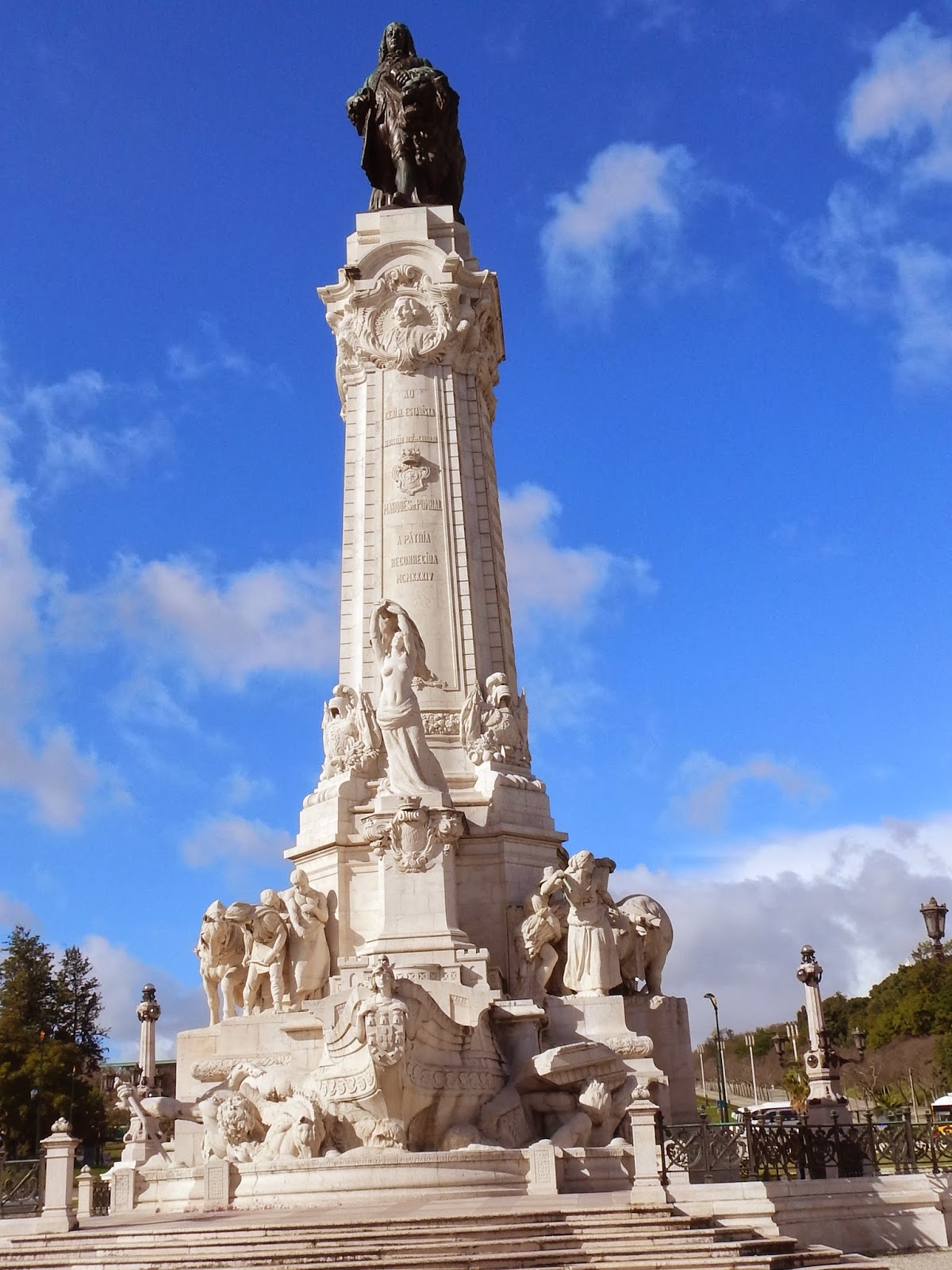 These and the other features he mentions are mainstream tourist sites, touches of classical glamour, I suppose, at the edges of his territory he seldom left during the last two decades of his life.
Much of his talking/writing life was spent in here:

His table in there has been preserved, they say. I'll take a closer look soon.﻿

The River Knows Which Way

To go downtown, I took the famous Tram 28, which happens to be close to my Graca abode. It had been a day full of rain, but the sun slipped out by the time I got to Chiado and the upscale crowd. I sat down under an umbrella next to a heater. The waiter, when he brought my tea, straightened and smoothed the table cloth, moving my book to do so. He set down the plate and cup, silver pot, and napkin holder, composing them over the table as if arranging flowers.
Heading home on 28, dusk now, I wasn't sure of my stop. "Do you know where we are?" I heard a burly fellow say to his girlfriend. "No idea," she said. That made three of us, but here I am, three doors from home, beer in hand (or close to it)--CSI dubbed in Portuguese right above me. 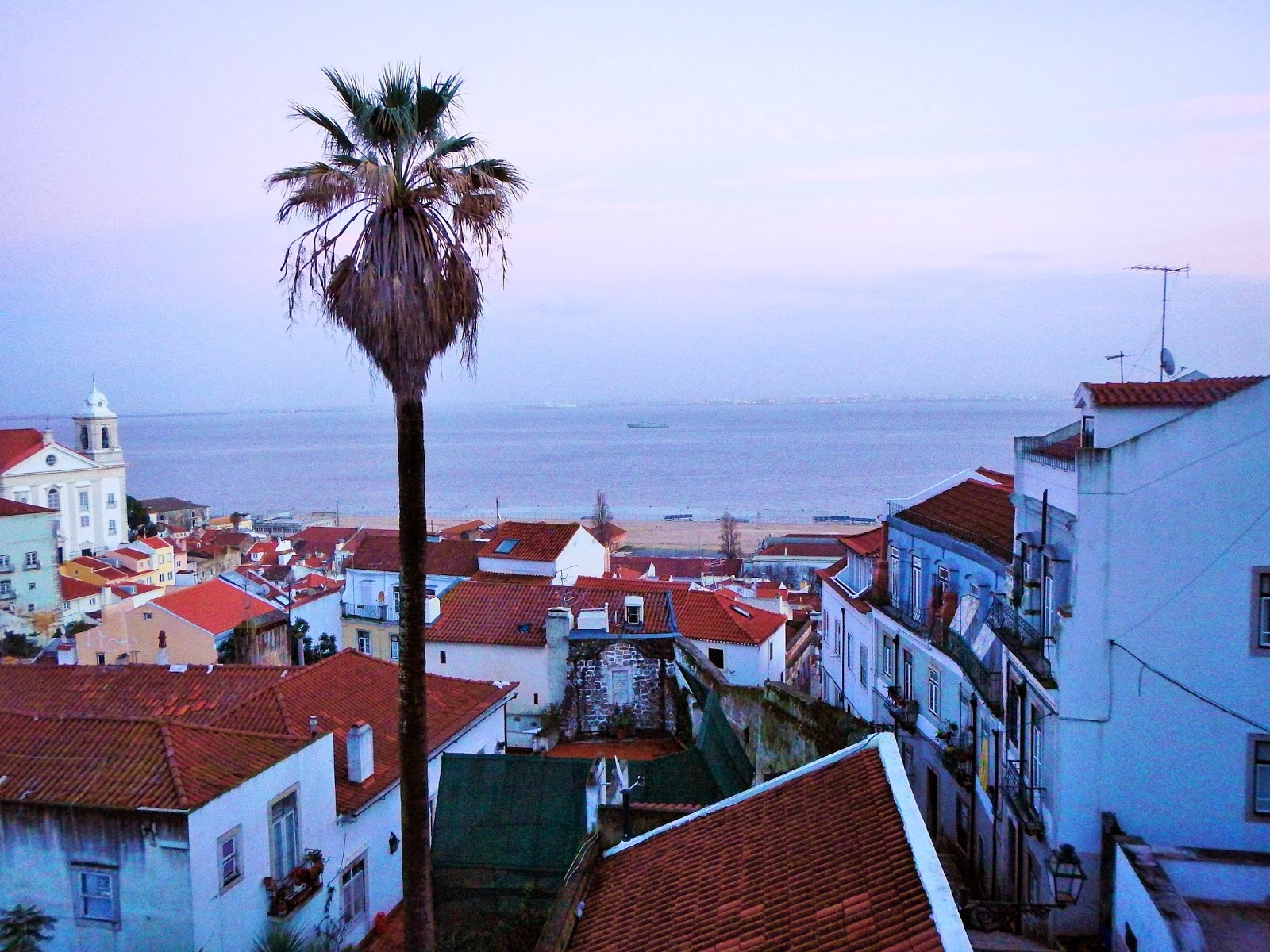 Talked tarts on a walk with Claire and Ariana, whose names I've likely spelled wrong. Ariana's a baker in Amsterdam. She and Claire chuckled over the wordplay of the name, which I didn't quite get, not being a tart-eater, except for the two I ate today.
Claire is a woman who, I suggested, as admiringly as I could, is a perpetual and peripatetic misfit. Two years in Amsterdam and she's ready, she said, for something else, maybe. Multilingual, she works with people--"coaches", is how she puts it--about how to function at our various crossroads--linguistic, cultural, psychodynamic, geographic, etc. I suggested that for some writers it is these moments of movement through, or tensions over, crossroads that generates the writing (hence, in my own case, the + that will mark pauses between passages in Hillsdale Book) (and a tip of the fedora to Robert Johnson).
So there we three blue-eyes sat, over our tarts.
The night before--yeah some night, flying east (an hour of settling, supper, two hours of squirminess, a moment's sleep, breakfast and arrival--all in six hours)--I sat next to Gilda from Toronto and her husband Harvey, talking about two articles in the Sunday Star: on a new anthology of Toronto writing about place, and on archival designs of proposed, but never built, major changes to Toronto landmarks. I'd told her just enough about my writing practice for her to conclude that both items were "right down my alley" (I hadn't mentioned my alley piece for the forthcoming anthology of writing inspired by Regina artist Wilf Perreault, who makes a home of alleys).
Anyway, Gilda and Claire and Ariana ended up getting my website address, which may lead them to these very words. If so, here's to you, ladies. Thanks for helping me break into Lisbon again.
Posted by Gerald Hill at 14:30 No comments:

As soon as I got to town the Leafs lost twice. My Leaf cap, a gift a few years ago from my daughter Lucy, was the last thing I jammed into my bag just now up in 607 of the BestWesternPlus near Toronto airport. It will arrive in Lisbon for the second time tomorrow morning, Lisbon time. A few days ago in Puerto Moreles, wearing the cap against the morning sun, I heard "Hey, Toronto" from one of the guys at the wharf trying to sell me a snorkel trip. A couple of times on Isla Mujeres I sensed people looking the other way, seeing my cap as a reminder of less congenial climate back home. In fact, I doubt I'd wear the cap around Toronto, which has enough Leaf fans already. (Here I nod to previous entries about not being a Rider fan unless I'm not in Regina, which is jammed with green and white.) Last night in the pub, for once I wasn't the only one rising or falling with the action of the Leafs-Jets game.
Anyway, in a few hours I'm off to Lisbon. I'll text the owners of the apartment I'm renting when I'm in the taxi leaving Lisbon airport. By noon I'll be stocking up on supplies in the mercado. I have 99 nights in Europe, which suggests an obvious writing plan . . .
Posted by Gerald Hill at 10:36 2 comments:

Brrrrrrrrrisk along the Caribbean seawall this morning, my last on Isla Mujeres.

Might have to do up a button on my beach shirt. 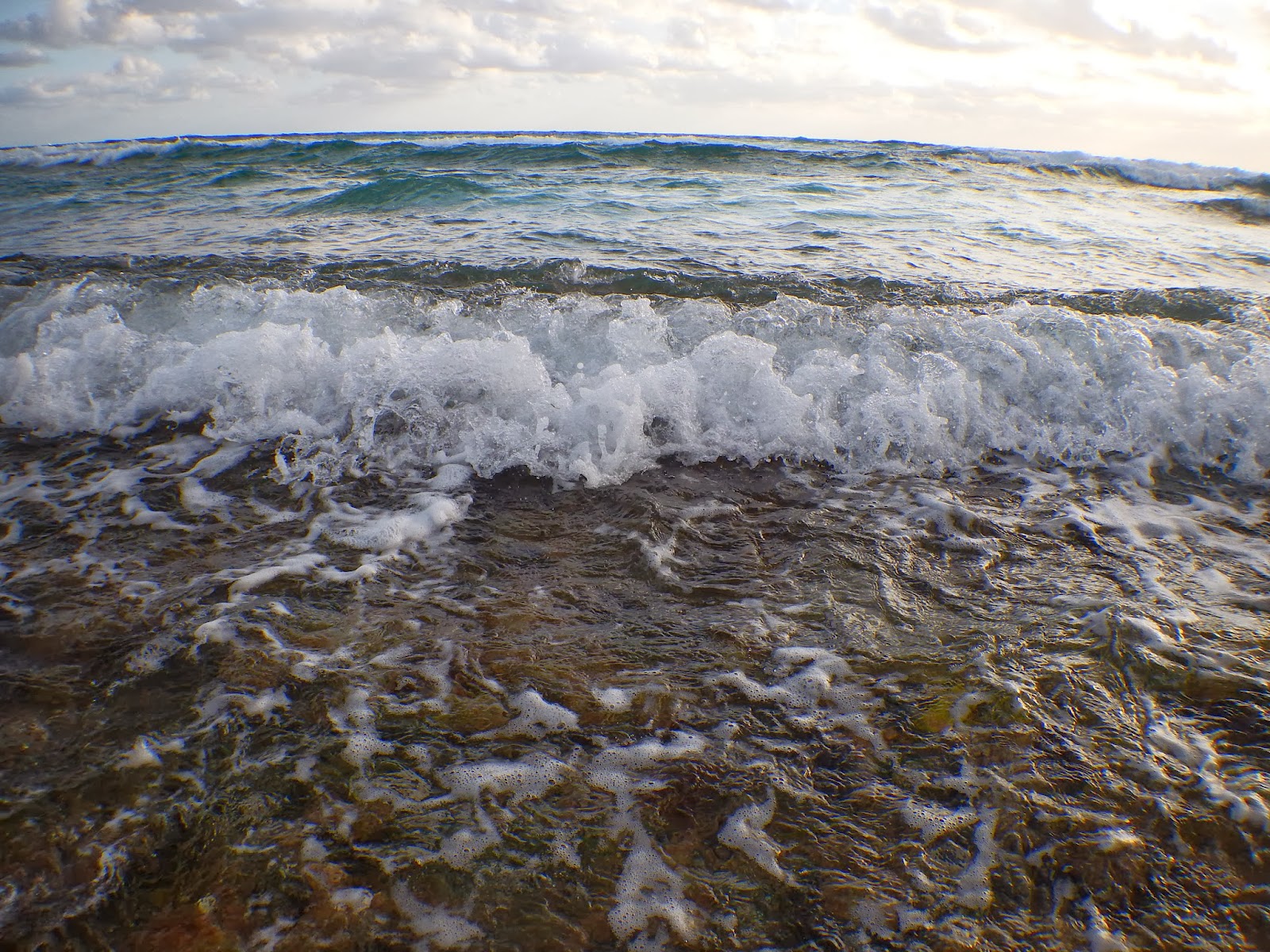 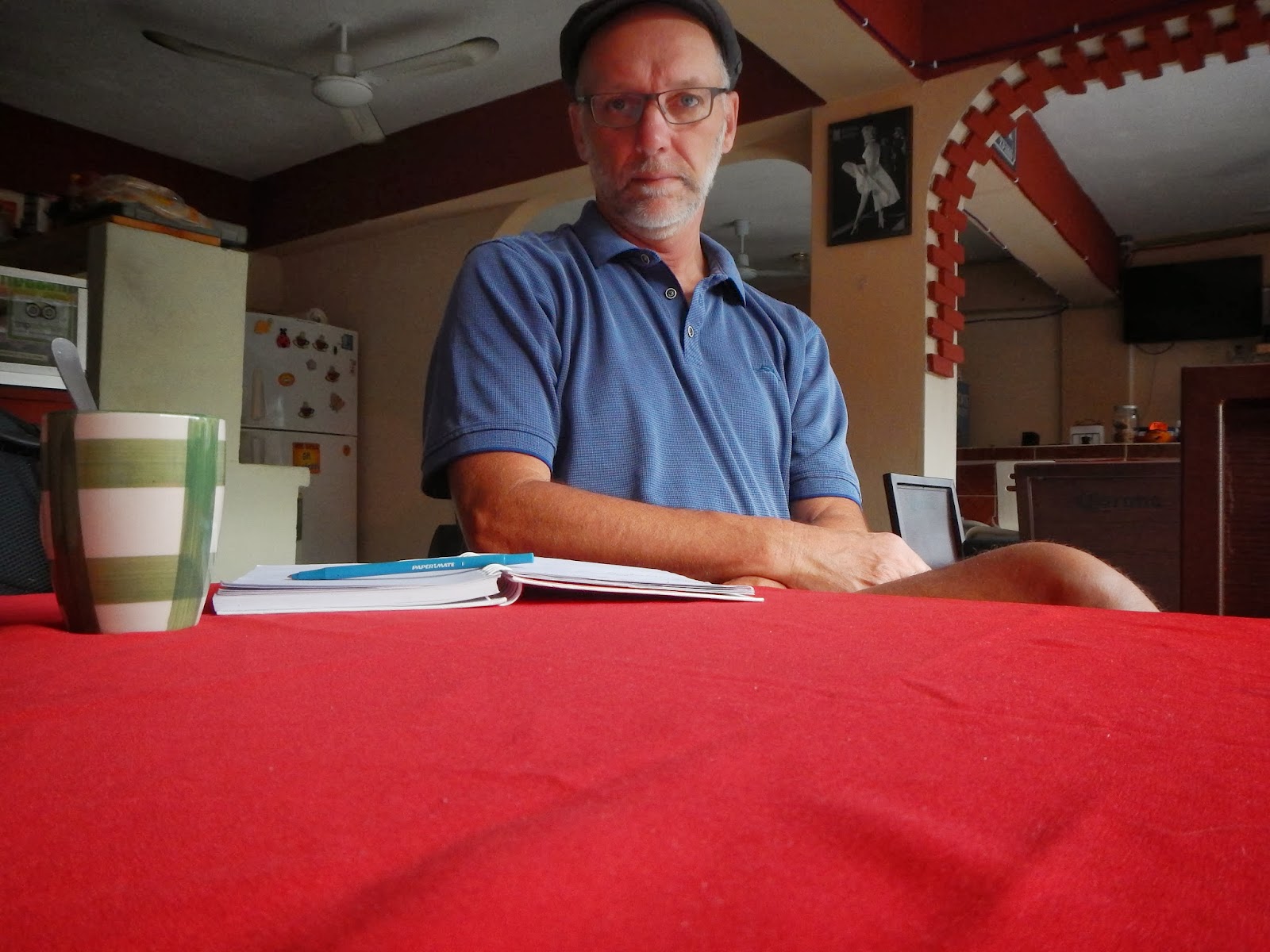 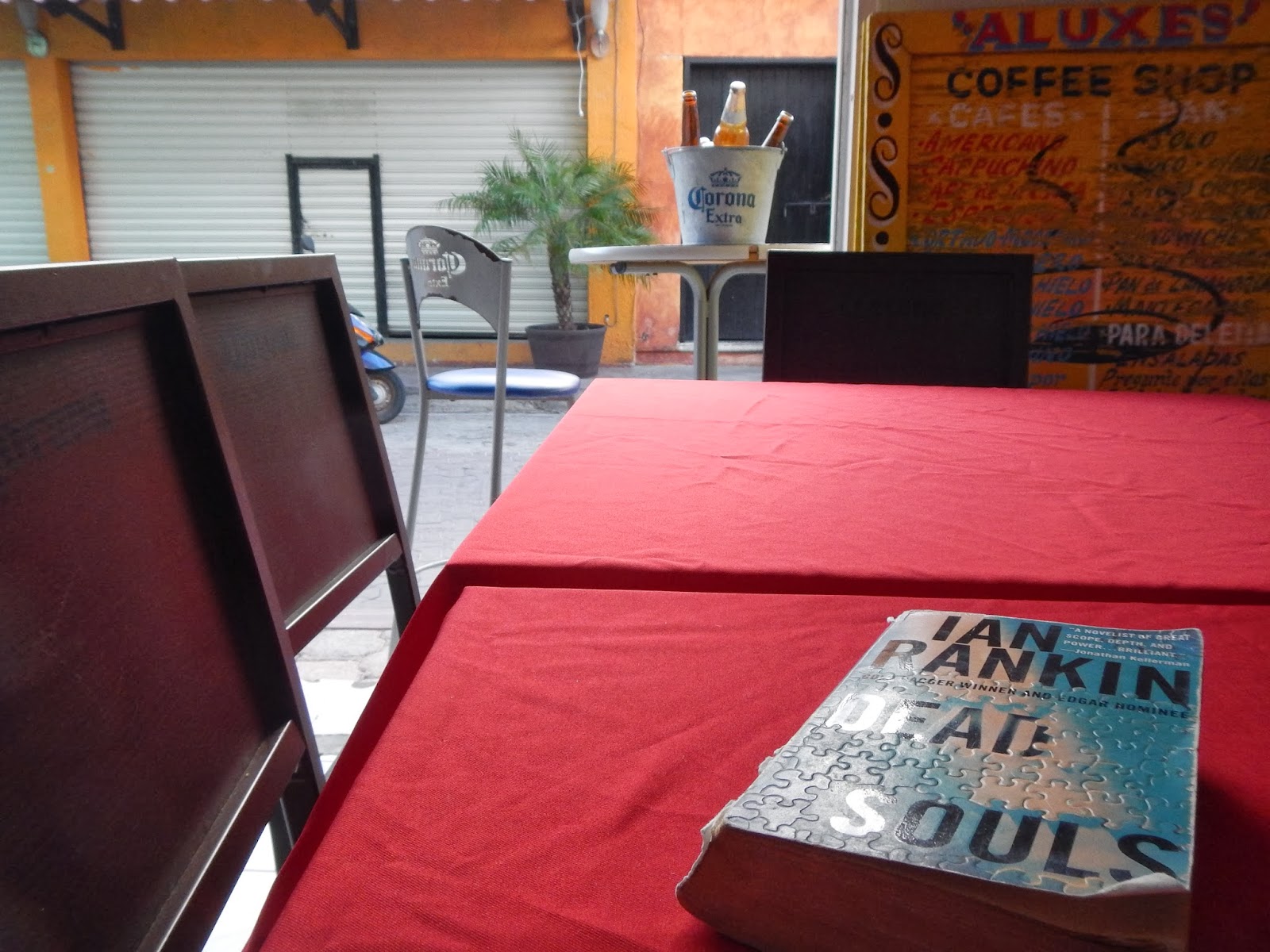 I sat by the ocean this morning, wondering how much to pay for the Yucatan sandals. Made right here, the guy said. I could sell you recycled plastic, like those Keens of yours.
I'd call the ocean happy, cat-happy, the way it leaps at the rocks on the Caribbean side of this island, Mujeres. The other side, where I beached yesterday with my sisters, stays calm, bucket-of-beer calm.
I sat by the ocean, admiring the image of my left foot in the sandal I'd tried on. He'd come down to 35 dollars; I'd come up to 20.
The waves kept coming. 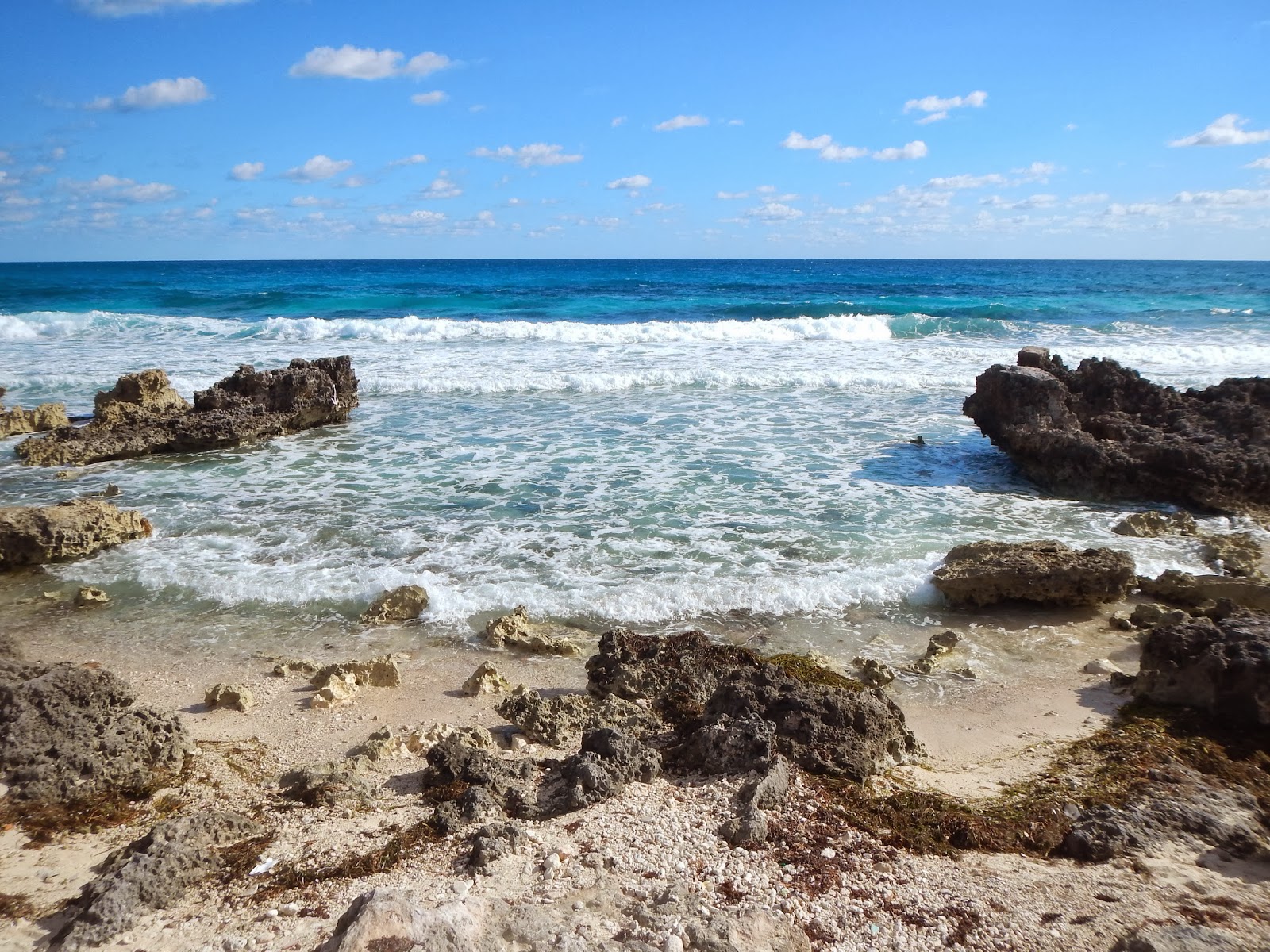 But an open courtyard. No open courtyard but four green lawnchairs under a canvas roof in the common kitchen area. No kitchen area but a toaster and microwave and crock pot in the back end of the hotel. No hotel but a series of locked and numbered doors next to a restaurant which pounded with Latin pop last night, my first in Isla Mujeres. I watched some Aussie Open tennis and fell into a longish sleep, yes sleep. Next: tea.
Posted by Gerald Hill at 08:03 1 comment:

Not yet. Might take the beach walk to town first, loading up on pesos for the next leg, a 45 minute taxi to the ferry to Isla Mujeres with two sisters and a brother-in-law. The other sister and her hubby will stay here another day then head home. As well as the inherent pleasures of hanging with my sisters--including bridge, Humm-bug and numerous meals and drinks--this Yucatan jaunt is a shakedown for longer travels ahead. So far, the many decisions about what to take or not have worked out well. Just one book, the rest on the Kindle app on my tablet. (Finished Lisa Moore's Caught this week, a terrific novel.) Next: tea.

It took me five beds in six nights to get to Alberta and back. By back, I mean the Lazy Dee Motel in Gull Lake, where I ran out of light, 7 or so hours southeast of Pigeon Lake (sw of Edmonton). I'd hoped to get to Herbert and that buffer--the old #1 highway--between CPR mainline and Hotel. You shake with trains passing.

Lying in room 3 at the Lazy Dee, I felt the train from straight down, bombing toward the bells. Not much sleep that night.

Hoping to see you on the Regina-Cancun flight on the 11th,
Gerry
Posted by Gerald Hill at 18:54 No comments: