hosing down Alfama, gathering hose in loops at the Largo, nozzle dragging over cobblestones

hose-women in lime-green overalls, one toque, one cap

man with cardboard box and bag of buns

man with belts and bracelets for sale

(a list for the Portuguese woman, noon, Largo do Chafariz de Dentro—may the fadista sing you well) 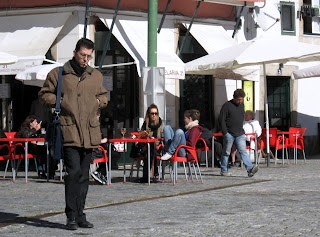 So now that I'm back in Lisbon and digging Saramago's The Year of the Death of Ricardo Reis, I've set myself up for some high reckoning: imagining Saramago imagining Reis--a character, or heteronym imagined by Fernando Pessoa eighty or ninety years ago--imagining Pessoa himself, also a character in this novel.  What we all have in common, if I may even for moment claim something in common with these figures, is that we're all in Lisbon, walking the streets, always an up and down proposition in this "city of seven hills".  In the pensao I checked into this afternoon, buying five days at a discounted rate, I carefully unpacked my bag in the manner of Saramago's Reis, a precise, formal man and a poet who writes precise, formal poems 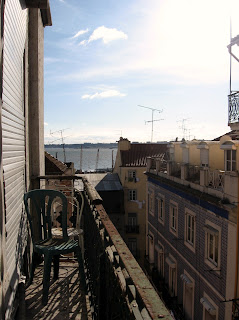 Starting tomorrow morning after breakfast, I'll sit out here, 3rd floor, looking south to the Rio Tejo.  Pessoa rarely left Lisbon.  Reis just returned after 16 years in Brazil.  Don't know about Saramgo, but his novels are full of, among much else, close attention to this place.

In the Manner of Jose Saramago

Having walked over a Roman bridge and sat down outside with his coffee in the shade of a 13th-century castle, the traveller, you will notice, even if like him you woke, short minutes ago, shown into light in the manner of a grandparent escorting his six-year-old grand-daughter onto the stage of a school concert at an hour already one or two past her usual bedtime, is not in Hillsdale.

Here the traveller, as if anticipating your next observation, that, to repeat the common expression, as a corollary to what you’ve already observed, you can’t take the country from the man, withdraws a packet of photographs, from Hillsdale, you assume, though couldn’t they just as logically, perhaps more so, contain newly printed images of Mertola, ten days and six time zones from home, from a compartment of his backpack on which the zipper has given out, the significance of which will soon become apparent.

What could be in these photographs? What could be in any photograph, you might just as well ask, knowing that only repeated viewing, accompanied by textual interventions, make sense, if that’s what you’re expecting, of such images. Couldn’t we crane in to have a look? But why does he not open the packet, perhaps show the young woman from the Turismo, dark-haired, like almost all the women here, not that the traveller has paid much attention, although no attention need be spent on such a mundane matter, who just now has sat down, they exchange the customary bom dia, a table or two behind.

She’s been kind, patching his broken Portuguese, during his daily visits, even Sundays in winter, when even most of the cafes close, to say nothing of the shops, for free internet access at the Turismo where the young woman, he must find out her name, answers the phone with a cheery Sim and his queries at her desk with a polite Yes, often expanded to Oh yes, let me show you, with accompanying unfolding of maps or getting up from her desk to retrieve a brochure from the display behind the traveller, who rotates on his spot like some kinetic sculpture left out too long in the garden this rainy winter, to follow her, uncertain where she’s going, his body thus mirroring the occasionally clumsy machinations of his mind, a reversal of the usual order. 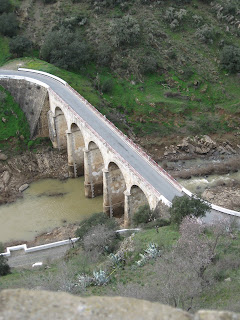 I’m in 1.1 of boulderpavement, a new on-line journal put together by Steven Ross Smith.

For the traveller viewing Hillsdale from across the sea, admitting that Hillsdale is far from the sea, new is a word that carries a lot of tailfeathers, as we peacock-watchers like to say. In Hillsdale, the traveller had asserted that the trees tell the story, remembering the seedlings he and dozens of other children carried home from school to plant in their brand new yards 50 years ago, now part of the canopy sixty or more feet above Hillsdale’s leafy, Leaf-fanned avenues, not to mention the stump culture, testament to trees past mature, to species tried and abandoned. Or, pavement tells the story, the traveller’s reading of what once was flat and shiny (in summer), now humped and patched, pitted and potted until little Newlands avenue, for example, becomes, year-round, an off-road experience on-road. Whatever stories of time and change the traveller might imagine from such observations, including correspondences to his own body, also a tad past mature, derive from the passage of fewer than sixty years.

The traveller muses in this manner while sipping tea in the shadow of a castle 700 years old, built on the remains of Islamic and Roman settlements another thousand years old. 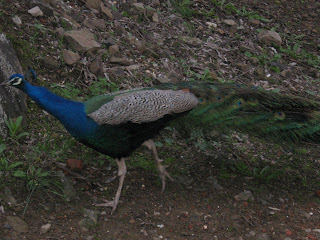 I sat down by the river in a new place, Mertola.  Nothing was familiar (but the fullness of water) until I saw a bird land.  Don't know the bird, but did recognize the landing.  So knowing begins. 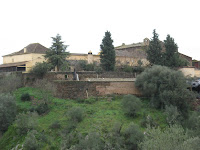 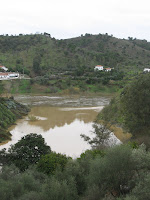 Across this Roman bridge from Mertola. 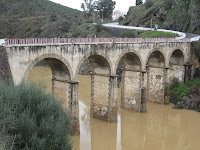 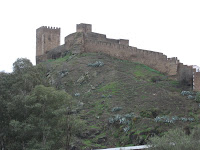 Corner of Hillsdale and Kramer

Even with a Hitchcock on, or a prized Seinfeld re-run, or the world junior hockey championship game, I can't help switching over to my new favourite tv show, Frontiers of Construction, documentaries on huge construction projects around the world--Hong Kong airport, PEI bridge, massive tent in London, etc.

I suppose I'm just being myself as a boy, fascinated with the big trucks, the earth-movers building the highway between Herbert and Swift Current.  I know such  fascination is what got me into my tractor book--the sight and sound of that Steiger, which seemed to glide (a creature greather than the putt-putts I heard all around the yard at St.Peter's Abbey farm, obviously) along the road on its way out to the field.  That's the image that drove my first moves into 14 Tractors.

In 2003 I built an on-line poem to accompany the building of two residence towers on the University of Regina campus.  A poem may be thought of a construction for making choices, I noted, quoting John Ciardi.  It was fun to build the poem piece by piece, incorporating the webcam mounted on the top of the library next to the residence construction site.

I'm imagining similar cross-overs now, researching the building of Hillsdale and building my Hillsdale (which tomorrow I'm heading off to Portugal, my frontier of construction, to do).  Here's a corner: 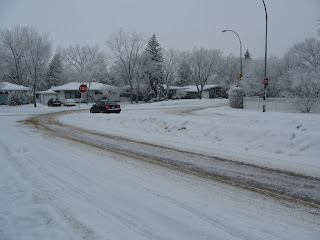