The Feb. 20 Guardian was available here in Viana do Castelo, lucky me.  Among its points of interest is the "10 Rules for Writers" feature.  As you might expect, some writers took the task seriously and came up with nothing but duds.  Others dashed off a disdainful list and came up with some gems.

1. Nobody is making you do this: you chose it, so don't whine. (M.Atwood)
2. Do give the work a name as quickly as possible.  Own it, and see it. (R.Doyle)
3. Do it every day.  Writing is a way of postponing the day when I won't do it anymore. (G.Dyer)
4. It doesn't matter how "real" your your story is, or how "made up": what matters is its necessity. (A.Enright)
5. Write in the third person unless a really distinctive first-person voice offers itself irresistably. (J.Franzen)
6. Remember: when people tell you something's wrong or doesn't work for them, they are almost always right.  When they tell you exactly what they think is wrong and how to fix it, they are almost always wrong. (N.Galman)
7. Never complain about being misunderstood.  You can choose to be understood, or you can choose not to. (D.Hare)
8. Defend yourself.  Find out what keeps you happy, motivated and creative. (A.Kennedy)
9. Honour the miraculousness of the ordinary. (A.Motion)
10. Keep a light, hopeful heart.  But expect the worst. (J.C.Oates).
11.Don't give up. (I.Rankin)
Posted by Gerald Hill at 04:29 No comments:

Man, I thought driving tractor was tough, but this afternoon, taking the wheel of the 2600-ton Gil Eannes at Viana do Castelo, I damn near had to turn around before I reached the Atlantic, the seas were so blustery. 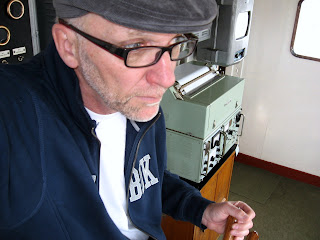 When I throttled back to just one of the 1400 hp engines from the usual two, that seemed to do the trick.  My Sunday afternoon turned quiet again, as if I was simply floating.
Well the ship hadn't been out since its decommission as a cod fishing hospital ship twenty years ago, and I promised myself I'd have her back by 3, or 15:00 as we say, so I cut back the engine on one side, I forget which one, and cranked her up on the other.  She spun about and slipped back into her mooring so neatly you'd think she'd never left.

"It's all yours," I said to the pack of Portuguese naval cadets, waiting to clamber aboard. 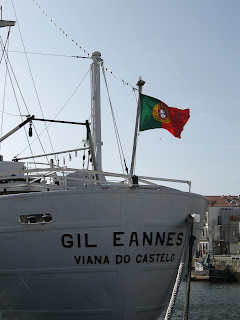 Saute garlic, onion and green pepper in olive oil.  Add one cup rice, letting it soak in the oil, then two cups water.  Right away add 1 tsp saffron (which, Belen says, you should buy in bulk in Vigo like Fred Wah does, since it's so much cheaper there), mushrooms, olives and sausage (or chicken or pork, which you should saute first with garlic, onion and pepper).  Cook uncovered over medium heat on stovetop until done.

But tonight in Viana do Castelo it's "Bacalhau a Gil Eannes" featured at a bunch of restaurants as part of a regional gastronomic promotion.  A cod dish, one of many, Viana in former times being major port for the cod-fishing industry off Newfoundland, and the Gil Eannes being a hospital ship serving the industry.  Now it's a museum and hostel in Viana.

And while I'm at it, I'll be working on a sea piece (of writing), trying to work out what the sea means most: the young people who gather in the afternoons to smoke and play cards, the many variations of cod dishes served in the evening, or the night itself, what the sea does to light.
Posted by Gerald Hill at 13:12 No comments:

So says the sign over my bathtub at the Residencial Jardim in Viana do Castelo, Portugal.  Try saying it aloud a few times.  Chances are, you'll find yourself composing a piece on the anxieties of travel, ending every stanza with that refrain.

The tiny 4-euro umbrella I bought in Mertola came in handy again when I arrived last night.  Everyone stood at the doorway of the train station, wondering if the heavy rain would let up.  I was pretty sure it wouldn't.  Anyway I had not only my umbrella but my new corduroy flat cap I'd had shipped to Vigo from the shop in Lisbon.  (I may have mentioned in an earlier entry that my head size broke the bank, so to speak, of the 154-year-old hat shop, and they had to make one specially for me.) But alarme, alrte, alarm, alarma was I wearing the hat correctly?  I'd worn out the reflection in the train car window checking.

I've got a cold, so it was straight to bed last night.  I heard an annoying hum--alarme! (etc.).  After first checking that it wasn't coming from my own body, I eventually identified it as the heater in the next room.  I slept unevenly, in dreams extending the plot of the Saramgo novel, The Cave, I'd begun reading on the train.

Bright and sunny this morning. 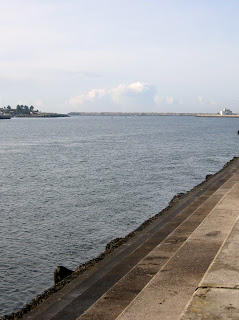 In my travels over the west end of the Iberian peninsual (Portugal, and Galicia in Spain), I have not seen ANYONE using a travel mug or in any other manner transporting a cup of coffee or tea.  My old Galician friend Belen says "I tried it once when Erin was visiting from Canada.  But I had to tell her 'Stop! I cannot walk and drink my coffee at the same time!'".

Belen suggests that the fact that waiters and waitresses get paid a decent salary explains why the service is so good in this part of the world, from the smallest cafe to the grandest restaurant (not that I've sampled many of those).  No "Hi, my name is Oscar and I'll be your waiter."  Instead, just people who understand what you want, bring it, and clear it away, always without comment and always at the right time.  The other component to this beautiful service culture is the customers themselves, who occupy every cafe or restaurant freely and respectfully, as if it were their own home. 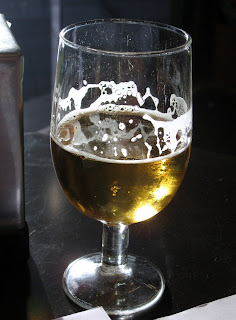 The Way I Order Tea is a Giveaway For Sure

Seeing me enter her store, a shop-keeper addresses me--before I say a word--in Galician.  In the next shop, again before I say anything, the shop-keeper addresses me in English.  Wondering about these matters, I asked my Galician friends what, if anything, makes me look as if I´m from somewhere else.  My Leaf cap perhaps? The rumple of my map?  My glasses, jacket, boots, height, scent, or manner of pausing inside doors?

Your blue eyes, they said (in this nation of brown).  I´d forgotten my eyes were blue.  Anytime I glance in the mirror, it´s to make sure everything´s still there, that´s all.

After that, my friends admitted maybe it´s the way I walk.  Maybe my sore knee shows.  Once I remember an English woman nudging her friend and pointing at me, saying Watch this, as I pulled out my hankie and blew my nose.  Maybe it´s the way I blow my nose.

Yesterday the eight hours of train travel from Lisbon north to Vigo, Spain, passed unremarkably.  Laurence Sterne might say it would little profit the Reader to be served the narrative of such travel.  (But he wrote Was I in a desert, I would find out wherewith in it to call forth my affections--If I could not do better, I would fasten them upon some sweet myrtle, or seek some melancholy cypress to connect myself to.)  My palm-sized copy of Sterne´s A Sentimental Journey, purchased second-hand from a shop in Lisbon, was remarkable enough for me.  Beautiful introduction by Virginia Woolf.

So now I´m in Spain in a modern apartment among other such buildings in this port city, home of two old friends from grad school.  Here I´ll stay for a while, although I already miss old Portugal and will likely dip back down there during the next few weeks. 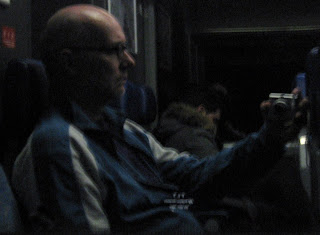 Anna, the young Russian woman who’s the daytime Reception person at my pensǎo, says she learned English from watching American movies. As millions have done before her. (Think of the Macedonians in Ondaatje’s In The Skin of The Lion gathering in Toronto, 1930s, to watch the gangster movies of Cagney or Robinson, Bogart or Raft, and shouting back at the screen the phrases they’d picked up.)

In Portugal, I’ve enjoyed watching the odd American movie myself. Unlike other western Euro countries, Portugal subtitles, rather than dubs, the imported movies. So I can listen and read along, picking up some Portuguese that way.
I’ve learned, however, of a third grade of Hollywood movies, after “theatrical release” and “straight to DVD”. This third lot might be called “straight to late-night Portuguese tv”—a motley collection of action films, cop dramas, contemporary romances and comedies, teen flicks and vampire thrillers. All bad. Embarrassing, really. (Years ago, teaching high school in Papua New Guinea, I used to show films on Friday nights. Hugely popular, no matter what the film. Then too, the only films I could get were all d-grade crapola—with some exceptions, like the fantastic documentary on the later years of Elvis Presley.)

Here’s an idea: You’ve just emerged from your morning shower—the moment when, says José Saramago, you are most beautiful—and you hear a siren from the street below. Your body, in fact, is the emergency, with consequences ranging from the cry of a peacock to the desertion of sea-going ships from Lisbon harbour. And make it about learning language while you’re at it. Good luck!
Posted by Gerald Hill at 05:32 1 comment: