I see in today's Globe that Dave McFadden, one of my teachers in Nelson years ago, is ailing. I wanted to tell a few stories about him but they're pretty weird and they'd take too long. Dave liked play, that's the gist of them. It was wonderful to experience as a new writer.

I threw a few rocks an hour or two ago, my first attempt at an upright stance (like that used by Stephanie Miller, for you curling fans). The knee feels fine. I fell during the first slide but stayed pretty steady after that. My draw weight was excellent, I think because the afternoon women's draw had just come off and the ice was still keen. Standing instead of squatting in the hack, though, presented the problem of how to see down the sheet bent over. Just get a glimpse, then visualize where the broom is, instead of sighting toward it, was the strategy, which actually showed promise.
Yesterday in my Sask Lit class I wondered if maybe we should figure out a game to play in the classroom. An athletic game. K., normally the most talkative one, grew silent. Turns out she hates athletics because she was never any good. She said she'd rather hang back and read books, which I suppose is ok. But "curling" was one suggestion, not a serious one. This all came from reading Lorna Crozier's Small Beneath the Sky, which my students are charged with imitating (a task, I always notice, students are reluctant to take on, either thinking it's plagiarism or just not original enough).
And ads for a curling event in Medicine Hat are marring the MLB playoff game between innings. I'll only catch the first few innings anyway before I head off to Artful Dodger for the Coteau launch.
Posted by Gerald Hill at 17:58 No comments:

The Leafs are on again, scoreless so far against Colorado. But so are the Tigers-A's. I've just finished reading student responses to the ending of Sven Birkerts' "Brown Loafers". Not having to attach a grade freed up my responding, I noticed.
Now the A's have second and third with nobody out against Scherzer.
In the essay, a pair of ill-fitting brown loafers stand in for an old friend who, after a terrible bout with heart disease and cancer, takes his own life. He'd given Birkerts the shoes, which B. wears to the memorial and hauls out of his closet every once in a while, though they hurt his feet. Still hard. Harder. go the last two fragments, referring to the shoes. The students seemed to de-value the shoes in favour of the loss and grief. I kept saying what about the shoes, throwing in an exclamation point (otherwise banned in the civilized country of our classroom).
Poor Scherzer. I like the guy, but now they're loaded, nobody out.
My son Tom's at the Air Canada Centre right now, half-way through the first, no score. He sent a pic. I warned him about the time my wife and I went to a Leafs game in Edmonton years ago. The 7-2 shellacking bummed me out so bad I couldn't enjoy dinner downtown. Made for a tough few hours, which we laugh about now
I saw my all-time favourite Leaf, Borje Salming, break his stick over his own goalpost after he'd tried to cover for his defence partner and left his own man free to score the 7th Oiler goal.
Now Scherzer's a strike away from getting out of it. Line drive to Jackson, cut to commercial.
Posted by Gerald Hill at 17:53 6 comments:

Tough Call, but the Right One

Leafs-Habs right now, how could I do anything else? I'm supposed to be getting supper ready or working out, or something. I might mute it and listen to MLB playoffs, might not.
Leafs, awesome powerplay goal! Down low to Bozak, bad break for Price. 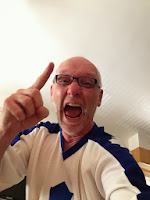