Re: The Maximus Poems

I was reading "polis is / eyes" and hearing again that notion that place is a way to see, that what we do when we write about place is, first of all, see.

I really like the frontnote about the "glyph": the Figure of Outward (we are told) striding forth from the domain of the infinitely small. I'll take that as an invitation to keep working from the specifics, which Olson and Williams and Marlatt and Nichol all do in their long poems. (The small but also the mythic--the Maximus, the saints, the Giants. Marlatt is different that way, but her river, like Williams' Passaic Falls, is mythic enough on its own.)

Reading Olson's poem, I'm reminded again that after the "accumulation" Robert Kroetsch spoke of at the SWG conference, the finding of form is like that "striding", that movement through/into/over the accumulated material. I must be careful, as I accumulate my Hillsdale material, not to get lazy: too passive, not enough striding.

I look forward to another session with Olson this afternoon.
Posted by Gerald Hill at 11:41 No comments:

Then came the Gloucester episode. Pulling out of Lowell before noon, I thought I'd drive east to the old seaport made famous in the literary world by Charles Olson's The Maximus Poems (although Olson, as much as I admire what I understand of his poetic, isn't on my "literary hero" team). Nothing worked. Couldn't find Olson's grave, couldn't find the bookstore that supposedly kept stacks of rare Olson upstairs somewhere (then did find it, but nothing that interesting in its stacks), found the place a tad resorty, couldn't stomach the turkey wrap, etc.

By 1:30 I was booting it back north, the Impala cruising easy in the bright sun and nonstop satellite radio jazz. By 6 I was handing over the keys to Louis, the Budget guy at Dorval, and shuttling over the Best Western for a burger and a ballgame and these blog entries.

While not actually a balling-the-jack kind of trip that Dean and Sal repeat in On the Road, I did cover 1250 km in 24 hours, half of it in the darkness of last night or early this morning, and much of it tightroping through the freeway maze of the Lowell-Gloucester axis just north of Boston or rush hour in Montreal.

I can see the Kerouac Commemorative in old downtown Lowell from my booth in Arthur's Diner on Bridge Street, a football kick south of the Merrimack River. The commemorative is made from 8 granite pillars, each etched with an extract from JK's writing. The 8 pillars, we are told, form a mandala, with benches scattered about. 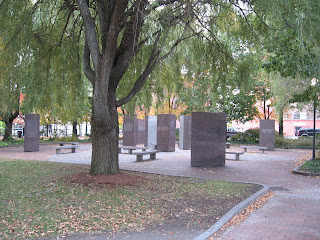 Nothing on the array of tourist signs I've seen around the city directs us to this spot. No doubt Kerouac's an embarrassment to Lowell. But he obviously loved the place, judging by the extracts on the pillars, which speak of what he did, what he learned, as a boy roaming around Lowell, the place his Canadian-born parents moved to and Kerouac lived through his high school years.

The diner's been here for 80 years. Maybe Kerouac ate a western omelette on a paper place as I'm about to do. "For sure, Kerouac ate here," the young cook says when I ask. "He used to live just up there, and drink in that bar around the corner."

Later, as I leave the diner, I just for a second imagine his hand closing the door.
Posted by Gerald Hill at 18:43 No comments:

I got to the gravesite in Lowell by 8:00 am. I'd written down "corner of Lincoln and 7th, Lot 94" but I still would have had to search a wide area if I hadn't spotted the wine bottle and the candle. When I got closer I saw cigarette butts, and various scraps of notes and photographs. The ground around the marker was worn. I added my used Man./Sask. map with my Dear Jack message on it and Herbert circled inside. 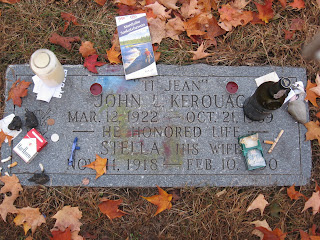 I stood there a while, no one alive but me taking pics in four directions from Kerouac's grave. 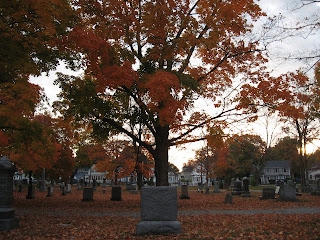 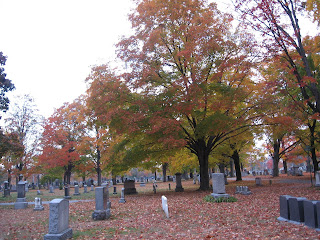 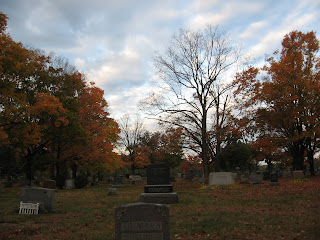 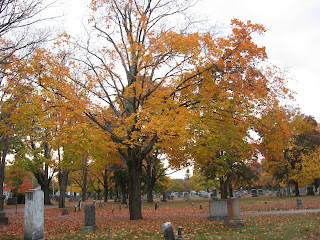 The cemetery's in south Lowell, a beat part of town.

Louis, the Budget rent-a-car guy at Dorval airport in Montreal (the airport still has 2 names), looked impressed, maybe just surprised, when I told him where I was going. “Oh,” he said. “I have relatives in Lowell.” Confirming what I’d worked out from studying the maps, he wrote directions to the Champlain bridge on the back of my rental agreement, and handed over the keys to a white Impala, an “upgrade".

By 6:00 I was heading south through the snarliest freeway system I’ve ever experienced. Two or three times I was sure I’d missed a turn but found myself heading to, then on, Vermont 89, an Eisenhower-era interstate, just as Louis and I had planned it.

The border agent asked my what my business was in Lowell. I wasn’t sure if she asked out of interest or national security concerns. When I told her a bit about Kerouac, she asked if I’d known him. “He’s been dead for 40 years,” I told her.

By 8:30 or so I’d had enough driving and stopped in Montpelier (pronounced mont-peelier by the locals), the state capital. Angelino’s pizza looked like the right place for a beer and a feed. Enjoying a Samuel Adams lager and a Copper Mountain ale, I asked the waiter if he could recommend a reasonably priced hotel. He paused before suggesting the Economy Inn up the hill. “There’s a closer one,” he said, “but my dad died there.” Turns out this waiter had been born in Lowell but hadn’t heard of Kerouac. I told him about the commemorative square in downtown Lowell, which I plan to see tomorrow. He’d seen it there but hadn’t realized what it was about. “I’ll check it out now for sure,” he promised.
Posted by Gerald Hill at 18:32 No comments:

It was dark this morning--what else would it be--when I flew out of Regina. Yesterday, picking up maps of Montreal and New England from the CAA, I figured out what I'd leave at the Kerouac gravesite: a worn-out map of Saskatchewan on which I've written: Dear Jack, For the "immense winds that blew clear down from Saskatchewan" [a line in On the Road]. You'll find another home inside. Love, Gerry

Here in Calgary--a three-hour stopover--I'm studying the maps so later I can escape Dorval in my rented Pontiac as slickly as possible. Will cross the Quebec/Vermont line at Philipsburg instead of the busier Rock Island crossing further east. According to the "Driving Distances" legend on the map, I could make it to Lowell in about 4 hours from Montreal. But that would mean a 9:00 pm arrival. My brother-in-law, from Connecticut, tells me there are plenty of motels along route 93, so I'll likely stop around 7 or 8, catch the Dodgers-Phillies game 5.

Meanwhile, by the end of Part Three of On the Road, Dean and Sal have arrived in New York.
Posted by Gerald Hill at 08:57 2 comments:

I was going home in October. Everybody goes home in October, says Sal in On the Road. I read this after I bought a plane ticket for Montreal, on my way to Lowell, Mass., for the 40th anniversary of Kerouac's death, October 21.

What do you want to get from that, somebody asked me. I'm not sure but know it's a kind of going home.
Posted by Gerald Hill at 17:37 No comments: