I took a walk after lake Wascana this afternoon

I imagined a city and what people did by them 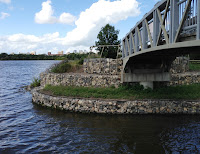 besides keep one eye for cloud.

I was heartened just now, arriving to my office at Luther around noon, to see the Geography 100 instructor holding a globe as he spoke. He seemed to be turning it.
I'm tempted to sneak across the hallway right now and eavesdrop on what they're up to:
He's speaks quietly, gesturing with one straight arm. As high as it gets he says.
I've left my office door open in hopes of catching more. He's do doubt aware that scientists are looking for other earths, in case we blow up this one. Across the hall, he's the only one I've heard speak. Large variation in solar radiation gets a louder tone.
Posted by Gerald Hill at 12:00 No comments:

Time to pull shut the screen door on the Hemingway studio (named after the architect, not the writer) and climb into my Matrix and drive off.
Two weeks isn't long enough but the hours on my new pine deck seemed endless. (Old deck shown in the pic.) You should see my tan!
I finished a piece on a painter.
I found a shape for my Luther College 100th Anniversary Poet Laureate piece.
I found a form for ongoing work on "cities".
And I left a nip of scotch for the next person.