New Place to Hang My Hat

I'll need one. Tomorrow I hand over the keyfob to my office at Luther. By mid-July I will have finished working with the Coteau editor of my Globe Theatre history book, after which I'll have to hand over my keys to my GT workspace, where I am at the moment.
Apart from my bachelor pad in the Frontenac, that will leave my constellation of coffee shops, pubs, park benches, picnic tables, library tables and pool aprons as home-away-from-home workplaces.
Last night I caught closing night of Mary Poppins at the Globe. I'd been tracking this show since rehearsals started almost two months ago and had seen at least a half-dozen performances. At first, it was simple fascination at watching these skilled actor/singer/dancers grow into and take over their roles. The production side of things (the props-makers, set builders, stichers, etc.)--I couldn't get enough of all that either.
I found myself inspired by their work, all of them, and I used opening night of MP (May 21) as my target for finishing my history of Globe Theatre, of which my Mary Poppins diary, also known as "A History of Right Now", would be the closing chapter (but for an Afterword).
Now that's over too.
What am I going to do with myself!
Posted by Gerald Hill at 10:49 No comments:

Stasisfaction, I called it. A pause until what to do next.
Step one was to tell someone I'd build a writing project around my new hat. A straw bowler. The idea was to see what the hat sees (step two). Write it down (three). Until the middle of July.
My hat would carry all the endings lately--my job, application deadlines, other writing projects. Soon I'd realize it was the neighbourhood that the hat was seeing. The hat would hang there.
But so far, this blog entry is all that's come of it. Tomorrow's another morning, though. 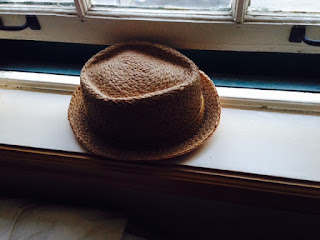