The essential difference among poultry, pottery, and poetry is that the first two get trucks.  Little white panel truck with a chicken on the side, or that half-cart, half-truck Saramago's potter drives in The Cave.

Once I bought a truck from Barbara Klar.  I was up to Riddell to work with her on a book (hers) in February, damn cold.  Her Datsun truck, an '81 or so, was parked for the winter in deep snow.  We had to haul it out with a tractor, which Barbara's partner drove.

Her Datsun was rusted out, like all Datsun trucks.  But it ran great.  A mechanic said, "Geez, you've kept this truck in good shape."  "Thank you," I said.

I drove it for three or four years.  My daughter Lucy, who was under 10 at the time, and Tom (about 12) climbed in and out of the front seat often, Lucy straddling the gear shift.

Defenceman/Forward Gerald Hill announced his retirement from organized hockey last night in Regina.  "I gave away my equipment," he said.  "It was time."

A lingering knee injury in recent years made the decision easy.  "I waited five or six years, but the knee didn't respond," Hill said.

Playing parts of 34 seasons, in Calgary, Rocky Mountain House, Nelson, Edmonton and Regina, Hill amassed career totals of 11 goals, 26 assists, and six or seven hundred minutes in penalties.  "That last number is sketchy," Hill said.  "Half the time we had no clock and just guessed."

But the numbers don't tell the whole story.  Known as "Pylon," Hill made up in physical presence what he lacked in the skills of skating, shooting, and passing.  "The 'new NHL' was the kiss of death for guys like me," Hill said.  "It was all skating and puck movement, like the burger without the beef.  No wonder the coaches stopped calling."

[This blog entry has been formatted to fit your screen and edited for content, specifically testimonials from Hill's opponents: "Brutal.  Couldn't play worth a shit.  Thought every icetime was Game 7 of the Stanley Cup finals"  and "Not much of a skater but tough to budge in front of the net" and "With that long stick of his he could hack at you from 14 feet away" and "Took the poor guy half an hour to get his equipment on."]

Probably most famous for crushing an 8-year-old into the boards of the old rink on the U of A campus, or for assisting on all three goals a one-eyed guy scored in Nelson, or for using the same stick for the last 16 years, Hill can also call upon a slim but potent bank of high points over his career.  Almost single-handedly he repelled a Kinsmen two-man advantage at a key juncture of game in Rocky in '77.  And poor Phil P.--"don't use his full name," Hill told this reporter.  "I don't want to embarrass the guy"--is still looking for Hill's laser-like forehand that beat him high to the glove side from close range out at the Sherwood Twin arena in Regina in '94.

By the time his career wound down, Hill had put together just the right look out on the ice.  "Modelled after Borje Salming, my favourite player," Hill said.  "Long, blue, white, TWICE as good as anything else out there."

Could he be coaxed out of retirement with the right offer?  "Coaxed, hmmmm," Hill said. 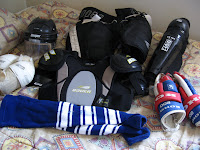 What a course outline starts to say:

"American Classics" studies three famous American novels narrated by characters who, like the rest of us, want things, make choices, do things, suffer consequences, and figure their worlds out (more or less).  Along the way, the novels offer us glimpses into the wonder of our own worlds. We’ll see what makes these novels “classics”—texts that have had enormous influence and popular staying power over the decades.

"The composition component of the course carries on from English 100. We will focus on selected elements of grammar and mechanics as required. Student writing will be our primary source for both problems and solutions.

"Formal assignments will consist of three essays of about 1000 words each. Other class activities will include lecture (although this will not be a lecture-based class), discussion, frequent journal writing, student presentations, group work, peer editing, informal assignments, and unscheduled quizzes. This is a language class in which plenty of listening, reading, talking and writing will occur, and in which all the elements of language in the worlds around us will be in play.

"Required Texts (buy them now while they’re in stock):
1. Twain, The Adventures of Huckleberry Finn
2. Salinger, The Catcher in the Rye
3. Kerouac, On the Road
4. a duotang journal"

Three people named Shelby, who didn't know each other, ended up sitting next to each other around the table.  We all enjoyed friendly laughs about having three Shelbys in a row.  The Shelbys laughed too.  If they don't sit together on Tuesday, we might have to make them.

Two of them, it turned out, were named for car designer Carroll Shelby, whose website is titled "An American Classic".
Posted by Gerald Hill at 14:10 No comments:

Warm, winded, bluer--like leaves I could see out the south window, in other words--is how I felt yesterday morning during a meeting.  Sure, about to wither and fall, get walked on, finally swept up by a noisy machine.  (Duchesa, if you're listening, you can hear the same noise when the gardiner trims grass below your place.)

But I know I'm enjoying myself back at ______ because I lay awake last night.with teaching ideas   And just one chapter of Huck Finn fired me up.  How wise the kid is, how innocent, how much he sees in other people.  Knowing that most students won't have that text with them when my American Classics class opens next Wednesday night, I look forward to reading that first chapter, Huck already wobbling the nature/civilization line.  Laughter shows up more easily in night classes, I think I've learned.  Huck will make us laugh.
Posted by Gerald Hill at 10:30 No comments: