My 14 Tractors scored the Poetry Award at the Saskatchewan Book Awards gala last night.  Not expecting to win, I did nevertheless sketch out the thank you list: the photographs by Shelley Sopher, the Writers/Artists Colony program of the Saskatchewan Writers Guild (wherein this book was first perceived, imagined, written, and re-composed), the financial support of the Humanities Research Institute at the University of Regina and Luther College, the expertise and commitment of my publisher, NeWest Press, and the two beautiful young women--my daugher Emmaline and her friend Nat--who sat with me at table 26 last night.  Had I stayed up there longer, I would have gone on to point out that my own writing practice gets a boost every time one of my friends publishes a book or gives a reading or receives acclaim in some other way.  Thank you to you writers out there. 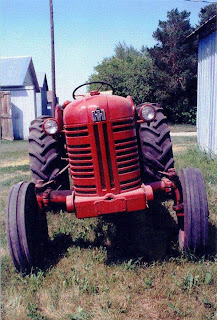 That's one of Shelley's photos, the International Harvester 300 Utility, which I imagined for a long time as the cover image.
Posted by Gerald Hill at 09:34 2 comments:

Last time I mentioned that word in a blog entry, I got an email a day or two later from an outfit in Nova Scotia that makes really nice crokinole boards.  They had some sort of internet tracking that notified them whenever people like me used that certain word.  They were very friendly, and I bought a board. 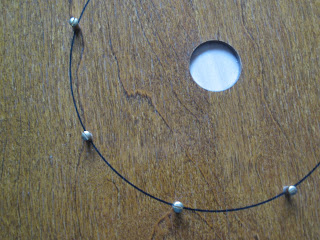 Last night after our reading, I played crokinole with Maurice Mierau and Tracy Hamon.  They're pretty good, but it didn't take long for home board advantage to prevail, at which point Maurice and Tracy lost interest.

Earlier, they'd been telling me I need to go down to WalMart and get some little rubber sleeves to wrap around the pegs.  Something about "random bounces".
Posted by Gerald Hill at 10:44 No comments:

The other day I had dinner at a brewpub with Cam and Annette so they could share their knowledge about Portugal.  In a gap between map references--the Iberian peninsula spread open on the table--Cam happened to mention that he'd grown up in Hillsdale.  I found out what schools he went to; I knew them well.  I named a half dozen or so prominent figures; he knew them well.  In fact, he knew some of them so well that he gaped in astonishment at my mention of their names.  He'd spent hours and hours with some of these characters, he said.  Once or twice he slammed his palm down on the table, remembering John G., or Alex N., or Gary G.

That closed the book on Portugal and swung the book of Hillsdale wide open.  To be continued.
Posted by Gerald Hill at 10:04 No comments: 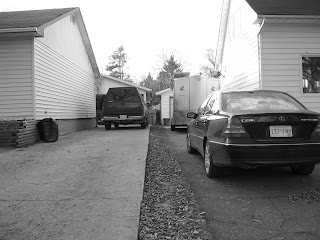 after viewing Robert Frank's The Americans (stunning--I can't believe I didn't encounter this collection before).  Introduction by Jack Kerouac. 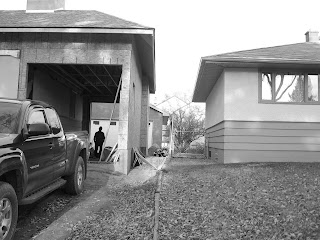 Earlier, I'd checked at Bird Films about an update to my Canon point-and-shoot. 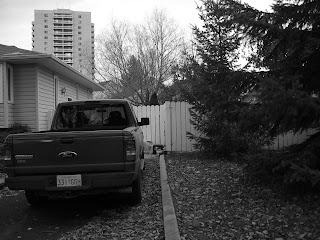 But for now I'll stick with what I've got. 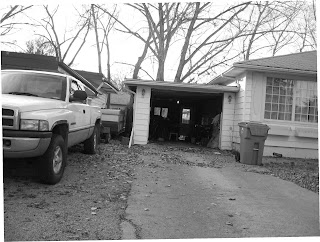 Re: The Horse Knows the Way

Last night I was enjoying the early poems, all I've read so far, in Dave Margoshes' The Horse Knows the Way, his new book of poems. These early poems re-figure or fill in a speaker's boyhood most engagingly.

At that point I put the book down.

I found myself--I wish I could stop there--thinking of Wallace Stegner's musings on how the past "utters and affirms us" (I think was how he put it). That's what the Margoshes poems were doing: going back over material from the past, re-membering it, filling in and thus affirming or building up the speaker.

It's a filling in of blanks, I reckoned, not unlike the filling in of basements, the laying of streets. In Hillsdale now certain areas long vacant, like the field behind Calder where the Riders used to practice, are filling in with high-density development.

Field becomes city, boyhood becomes poem, city becomes field for poem, and so on.
Posted by Gerald Hill at 09:41 No comments:

My poem about the legendary Habs (later, Leaf, Blues even Oiler) goaltender Jacques Plante was as wrong as a poem can be. According to that poem I wrote about 25 years ago, it was in Detroit where Plante was hit in the face by a puck and refused to go back out unless he could wear a mask.

TSN says it happened in New York, 50 years ago yesterday.

Change is not easy in the context of a tradition-bound culture like 50s-era hockey. Plante's free spirit was all about change, however, and the Andy Bathgate wrister Plante took in the face was enough to let the goalie mask in forever (although some goalies played without one as late as the early 70s). "Artist at work" was the tag applied to Plante. I saw him up close from a seat by the face-off circle at Northlands Coliseum in Edmonton in about 1975. He roamed freely, handling the puck as well as any defenceman, shouting instructions to his team-mates the whole time.

Plante's part of the Hillsdale material now. Fifty years ago yesterday, someone in Hillsdale looked west through what soon will be a thick, winter-long ridge of frost (though I suppose the window was tight and new then), maybe picked up the paper and read about Plante's new mask, maybe watched Plante on tv a day or two later, beating the Leafs again.

And the writing about all this will be wrong, will be changed, will be then and now.
Posted by Gerald Hill at 11:05 No comments: